Directed by Bart Freundlich
A first-class road movie that proves you can run away from home, but your ego and your problems go with you.

There is a story about an Egyptian monk who was tormented by temptation. One day he decided to leave his cell and move to another place. As he put on his sandals he saw another monk not far away also put on his sandals. “Who are you?” he asked the stranger. “I am your ego,” came the reply. “If you are leaving here on my account, you should know that wherever you go from here I shall always go with you.”

The hope of escaping from personal problems and pressures by hitting the open road is a persistent myth. The real truth is hard to swallow: We always take what is troubling us along on the journey. World Traveler is a powerful and poignant illustration of this harrowing process.

Cal (Billy Crudup) is a successful New York architect living in New York’s West Village with his beautiful wife and three-year-old son. On his son’s birthday, feeling trapped in his life, he decides to hit the open road. In a small Pennsylvania town, Delores (Karen Allen), a waitress, recommends him for a construction job. She senses that he has something to work out. Cal is befriended by Carl (Cleavant Derricks), an African-American who is looking for a drinking buddy. Cal’s wife puts the stranger in his place just before he decides to leave town.

Cal gives a lift to Meg (Liane Balaban), a free spirited young woman who is hitchhiking across the country. Then in an airport in Minneapolis, Cal bumps into Jack (James LeGros), a high school classmate who remembers him as a stuck-up jerk. Cal is unprepared for this angry man’s verbal assault upon his character.

Writer and director Bart Freundlich shows how all the characters the protagonist meets on the road mirror back to him the most disagreeable and distressing aspects of himself — his escapism, his irresponsibility, his selfishness, and his indecisiveness. This mirroring process comes to a climax when he rescues Dulcie (Julianne Moore), an alcoholic who is on a quest to rescue her young son from her estranged husband. Although Cal wants to redeem himself by saving her, he lacks the will and the patience to do so.

In Oregon, the weary traveler drops in unexpectedly on his father (David Keith) who abandoned him 22 years ago. Cal, at last, confronts the monster in the basement of his psyche and the shadowy character in all of his nightmares. World Traveler is a first-class road movie with a compelling and intense performance by Billy Crudup.

The DVD features a full audio commentary with director and screenwriter Bart Freundlich, actress Julianne Moore, and cinematographer Terry Stacey. The trailer and a deleted scene are also included. 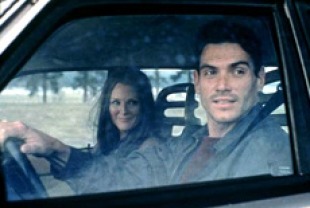