Directed by Peter Naess
A Norwegian film that celebrates an unusual friendship and the uncanny ways two eccentrics come into their own.

Elling (Per Christian Ellefsen) has lived a quiet and sheltered life at home with his mother for 40 years. When she dies, he is institutionalized. This fellow prefers isolation to any interaction with others. His roommate, Kjell Bjarne (Sven Nordin), is a giant of a man with a keen interest in sex. Elling entertains him with stories about his sexual exploits, which turn out to be fantasies.

When the two men are released under a supervised program that allows them to live alone, social worker Frank (Jorgen Langhelle) finds them an Oslo apartment. He encourages them to become normal citizens of the world. But Elling is frightened by all the activity on the streets. "I have always had two enemies, dizziness and anxiety," he says.

One day Kjell manages to get him across the street to a restaurant. Elling is quite amazed by this accomplishment. "Some people go skiing in the North Pole, while I have problems just crossing a restaurant floor," he notes. Their triumph is capped when he calls Frank and tells him the good news. Until then, Elling has even been phobic about using the telephone.

Peter Naess directs this Norwegian drama based on a novel by Ingvar Ambjornsen. Elling was a 2001 Academy Award nominee for Best Foreign Language Film. Unlike the characters in other stories of this type, these quirky men maintain their idiosyncrasies and flaws as they slowly open up to the exigencies of a wider world. Kjell meets and falls in love with Reidun (Marit Pia Jacobson), a pregnant woman who lives upstairs from them. But deeply disappointed by his lack of communication skills, Kjell bangs his head against the wall in frustration. When the magic moment that he's been dreaming about for years finally comes, this oversized virgin has to ask Elling to loan him some clean shorts to wear in bed with Reidun.

Meanwhile, Elling surprises himself one evening with the discovery that he's a poet with a gift for words. He musters up his courage and attends a poetry reading. There he meets writer Alfons Jorgensen (Per Christiansen) who encourages him to write. Soon Elling is taking great satisfaction in composing verses and hiding them in packages of sauerkraut at the supermarket. He fancies himself as "E," the anonymous poet. When a local newspaper reports on "The Sauerkraut Poet," Elling is very grateful, realizing that he has found his own special way into the world.

This Norwegian comedy celebrates an unusual friendship and the ways two eccentrics come into their own despite the great odds against their doing so. 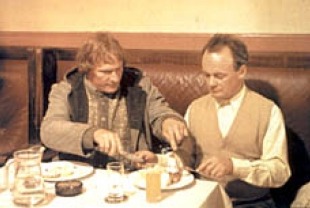