Directed by Steven Soderbergh
Covers 24 hours in the lives of seven individuals who are searching for some personal connection that will give their lives meaning.

Carl (David Hyde Pierce) has bad dreams that spill over into bad days. He's married to Lee (Catherine Kenner) who has lost all interest in him. He is a magazine editor whose latest piece is on porno women and the way they pick up their nicknames. His boss calls him into his office and asks him the question: When you go the refrigerator to get a bottle of beer, do you drink it right out of the bottle or do you pour it into a glass? Carl says the latter and is fired. His boss wants only those who seize the moment and savor direct experience working for him. When he gets home, Carl is distraught to discover that his beloved dog has eaten some chocolate brownies laced with hashish. A vet arrives and they get into a heart-to-heart talk. It's the only connection with another person he's made all day.

Meanwhile, Lee leaves her husband a note explaining her dissatisfaction in the marriage and her plans to leave him. She carries this dark cloud to work where she's a Vice President of Human Resources. Her responsibility is to inform a handful of individuals that they've been fired. This task enables Lee to unleash some of the anger she has stored in her body, but it's not enough. When she learns that her lover, Calvin (Blair Underwood), is leaving her, she gets boiling mad. Lee curses some movie company that is shooting on the streets and blocking traffic. At lunch with her sister, Linda (Mary McCormack), she's on edge even when receiving a gift for her fortieth birthday. The day ends badly at a party for Gus (David Duchovny), a big-time producer from New York.

Linda, who works as a massage therapist in a Beverly Hills hotel, is very excited about the connection she's made on the Internet with an artist who wants to meet her in Tucson over the weekend. She believes that this relationship has already gone quite smoothly and promises great things. Although her lunch date with Lee upsets her, she doesn't let it spoil her good spirits. She gives a massage to Gus, who has a odd request that turns out to be quite profitable for Linda, enabling her to purchase a sexy new outfit for her upcoming trip to Tucson.

Meanwhile, Arty (Enrico Colantoni) is directing a play, The Sound and the Fuhrer, starring a very pushy actor (Nicky Katt) who relishes the opportunity to play Hitler. He seems to be careening out of control, ordering other actors and actresses around and even challenging Arty's focus on the stage production. The director does have his mind occupied with a trip to Tucson where he'll be meeting the woman he's been emailing for quite a while. He feels totally relaxed with this form of connection.

In a movie within the movie, Francesca (Julia Roberts) plays Catherine, a journalist who is doing an interview with Nicholas, a television actor who has some strong feelings about the role of African-Americans in Hollywood. He's played by Calvin whose next scene as Nicholas is in a movie with Brad Pitt where he plays a sidekick to the star. At Gus's party, Francesca meets up with a young man who knew her years ago and was mesmerized by her presence. Their connection turns out to be a surprise to both of them.

Following the smashing successes of Ocean's Eleven, Traffic, and Erin Brockovich, director Steven Soderbergh was obviously in the mood for a change of pace. This eighteen-day video shoot covers twenty-four hours in the lives of seven individuals who are searching for some personal connection that will give their lives meaning. The screenplay by Coleman Hough has an equal mix of humor and humanity as it circles around the busy lives of these people who are all involved peripherally or directly in the movie business. One of the most quaint and telling scenes involves a neighbor of Calvin's who collects his mail from the box in front of his house while wearing a Dracula outfit. It seems that some folks in Hollywood just can't let go of the roles they play.

The DVD includes an audio commentary with director Steven Soderbergh and screenwriter Coleman Hough, a production interview with Soderbergh, and a featurette of "in-character interviews." There is also a selection of deleted scenes and behind-the-scenes footage. 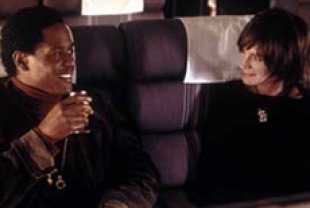