Directed by Jesse Peretz
A funny cross-cultural comedy about the adventures of two American brothers in France where they've inherited an ancient mansion filled with history.

Graham (Paul Rudd), a semi-slacker from Kansas, and his adopted brother Allen (Romony Malco), a slick wheeler-dealer from Los Angeles, have inherited a chateau in France from a long-lost relative. These two Granvilles couldn't be more different: one is white and the other is African-American; one is simple minded while the other a fast thinker; one has no business sense while the other functions naturally in this arena. On the train ride from Paris, they reveal some of the personality quirks that will come between them later.

Arriving at their destination, the brothers find no one there to meet them. Their problems are just beginning. The officious butler (Didier Flamand) at the mansion makes them both feel ill-at-ease. Graham tries some French phases and only makes matters worse. The Americans warm to the pretty young maid Isabella (Sylvie Testud) who has a young child, then compete for her affections. They are upset to learn that the chateau is in need of extensive repairs and that they will have to assume the gigantic debts accrued over the years.

This delightful cross-cultural comedy is directed by Jesse Peretz who shot it on digital video. The actors improvised much of the material, and Paul Rudd seems to have had the most fun with his fracturing of the French language. When Allen, who insists on being called Rex, decides to sell the place, his business skills come to the fore. He convinces a real-estate agent (Nathalie Jouen) to get things going swiftly by showing the chateau to clients. The staff, upon hearing the news that they may soon be out of work, decide to sabotage the brothers' efforts. Humorous complications ensue when a very rich and self-absorbed American (Donal Logue) decides to buy the place. The Chateau cleverly probes the cross-cultural differences between Gauls and Yanks. 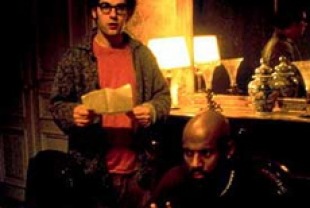