Directed by Sandra Nettelbeck
A highly original German drama about the startling transformation of a talented but lonely chef.

Martha (Martina Gedeck) is a very talented and confident head chef at Lido, a posh restaurant in Hamburg, Germany. She is lionized by certain fine cuisine lovers for her pigeon and truffles dish. But her boss (Sibylle Canonica) has doubts about Martha's mental stability and orders her to see a therapist. Of course, while she's on the couch, all this chef can do is talk about food. Martha has no social life at all; she's totally consumed by her work. Even though she's uncomfortable with the praise of certain regular customers, she's very thin-skinned when it comes to being criticized. Martha blows up when a finicky man criticizes her foie gras and in the kitchen calls him a "barbarian."

Given the pressure of her job and the nervousness she exhibits with her co-workers, Martha is really thrown for a loop when her sister is killed in an automobile crash and she has to look after her eight year-old niece Lina (Maxime Foerste) until the girl's Italian father, whom she never knew, is located. The little girl goes into a deep depression and refuses to eat. The chef finds the strain of caring for a grieving child quite disorienting. Luckily, Sam (Ulrich Thomsen), an architect who lives downstairs, is able to help out.

While Martha is away from the restaurant, her boss hires Mario (Sergio Castellito) without telling her and suddenly her exalted position at work is in jeopardy. This relaxed and fun-loving chef is an irritant to the perfectionistic Martha. But Lina, who starts camping out in the kitchen after school, takes an immediate shine to Mario. She even devours some pasta he made, much to the consternation of her aunt who hasn't been able to get her to eat much at all.

Writer and director Sandra Nettelbeck beautifully orchestrates the transformation of the chilly, neurotic, and self-absorbed Martha as her heart begins to open under the tutelage of Lina and Mario. At one point, she's so overwhelmed by the confusions and disappointments of coping with an eight-year-old, she says in frustration: "I wish I had a recipe for you that I could follow." But, alas, the education of her heart is a slow process that calls for patience and attentiveness.

It takes Martha quite a while to warm up to Mario who has a genuine high regard for her culinary skills and certainly doesn't want to take over her job as chief chef at the restaurant. Lina brings them together on a day they both have free and, for the first time in her life, Martha relaxes allowing Mario to cook an Italian meal which they eat seated on the floor. But afterwards she hyperventilates when she sees her meticulously organized kitchen looking like a hurricane had hit it!

Martha has to learn to live with the messiness of life and all the miseries that come with loss of control. For her, the first step in responding to Mario's love for her is to simply ask for his help when she desperately needs it. 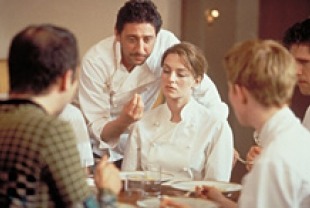