Directed by Stephen Herek
An inspiring drama about a music teacher who over a 30-year period turns a job into a soul-satisfying vocation, thanks to his patience, passion, and kindness.

Glenn Holland (Richard Dreyfuss) is a composer who plays weddings, bar mitzvahs, and various other gigs to support himself and his wife, Iris (Glenne Headly). But in 1964, he decides to take a job teaching at John F. Kennedy High School. He has already started working on a symphony and hopes that this day job will leave him free in the evenings to focus on his masterwork, which will be the legacy he leaves behind in the world. Helen Jacobs (Olympia Dukakis), the school principal, wants him to put all of his time and talent into teaching music appreciation. But the students in his classes are bored and tired most of the time. Holland soon grows frustrated with their laziness and lack of interest in what to him is the passion of his life. Jacobs challenges him to do better — not just to teach the textbook but to give them a compass that will help guide them into a better place.

One of his first challenges is a frustrated girl (Alicia Witt) who spends a lot of time practicing her clarinet but just can't get the hang of playing without tensing up and making errors. Holland spends extra time with her before school, working with her in an empathetic and patient way. He asks her what she likes most about herself when she looks in the mirror. She replies her red hair, which her father says is the color of a sunset. Holland suggests that she close her eyes and think of that sunset when she plays her clarinet. The image does the trick, and her music turns around.

As the years pass by, Holland's teaching improves, and he finds himself taking on more responsibilities at the school. Bill Meister (Jay Thomas), the football coach and Holland's best friend, agrees to teach the marching band how to move in step if he will help Louis Russ (Terrence Howard), an arrhythmic African-American youth, play the bass drum; the young man needs a credit for being in the band so he can qualify for the wrestling team.

Meanwhile, Holland's family life suffers. Iris becomes irritated that her husband seems willing to spend more time helping out his students than being a father to his son Cole (named after John Coltrane). The boy, who is deaf, feels excluded from his father's life. In one of the most touching scenes in the film, Holland realizes that he has slighted his son and so he offers to give a concert at the special school he attends. As a panel of colored lights enables the deaf students to follow the music, he serenades Cole with an emotionally laden rendition of John Lennon's song "Beautiful Boy." Equally touching is his classroom explanation of the lengths to which Beethoven went to create his symphonies after he went deaf.

Holland's teaching style loosens up, and he integrates rock music into the curriculum even though it is not popular with many parents. A high point is when he puts together a tribute to Ira Gershwin with a show sung and danced by students. Rowena Morgan (Jean Louisa Kelly) bowls him over with her beautiful voice, and he takes a special interest in her. The inevitable challenge of what to do with a student who has a crush on him is handled gracefully, although in the process, Holland is reminded that he never took the leap of faith necessary to bring his symphony to fruition.

In 1995, the principal (W.H. Macy) of the school, who has never appreciated Holland's unorthodox ways, has to cut the budget and decides to close down the music, theater, and art departments. Thirty years after making a decision to teach as a temporary gig, this worn-out old man roars like a lion at the injustice of cutting out the creative curriculum for the high school students. Leaving the building with his wife and son, Holland has one last chance to see what his work has come to over the years.

Director Stephen Herek draws out a rousing and rounded performance from Richard Dreyfuss in the lead role. The screenplay by Patrick Sheane Duncan shows how the spiritual virtues of passion, patience, and kindness over the long haul can turn a job into a soul-satisfying vocation. 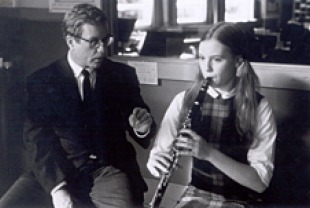