Directed by Blair Treu
A touching family film about the things we keep hidden away from each other that create barriers between people.

We all have secrets — things that we feel bad or guilty about, things we wish had never happened. Some of these have harmed others; most have also injured our souls and psyches. There are secrets we only share with those who are closest to us. And there are those we keep hidden away from everyone. This family film directed by Blair Treu and written by Jessica Barondes zeroes in on this interesting and not often explored topic that plays such a central role in our private lives as children. Although the material is very melodramatic and predictable, there is enough here of interest for families to enjoy and ponder.

Emily (Evan Rachel Wood) is a very disciplined and talented violinist who feels neglected at home since her middle-aged mother is pregnant. Her two best friends are away at camp and miss her. But she is working very hard preparing to audition at a local symphony. Her music teacher (Vivica A. Fox) believes that she has a good shot at making it.

All of Emily's spare time is spent as the neighborhood's Secret Keeper. For fifty cents a secret, she listens to the confessions of kids and dispenses advice. Her pint-sized clients include a thief, a catcher of stray cats, a little girl who has misrepresented herself on the Internet, and a boy whose adventuresome schemes keep him busy playing many different roles.

When Philip (Michael Angarano) moves in next-door, Emily soon has a companion for the summer. She keeps a secret for him — the fact that he has broken a precious knight in his father's expensive chess set. And when he finds out how talented she is, Philip even begins taking piano lessons again. But their relationship is put in jeopardy when his older brother David (David Gallagher) is booted out of tennis camp for breaking the rules. Philip tells Emily the reason why and afterwards wishes he hadn't done so.

Evan Rachel Wood holds this family drama together with a richly nuanced performance. Michael Angarano is good as Philip; his facial mannerisms remind us of the the talented actor Robert Forster. Vivica A. Fox is convincing as Emily's music teacher. She's the one who helps her see the light in regard to secrets. 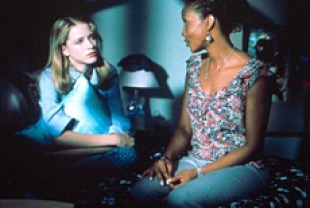