Directed by Carrol Ballard
The most bracing and breathtaking film ever made about world-class sailboat racing.

Wind is the most bracing and breathtaking film ever made about world class sailboat racing. While most directors would have considered this triumph satisfaction enough, Carroll Ballard wanted more. He has also presented a complex story about how important equality is to both love and work.

When Will Parker is chosen to be a member of the U.S. crew in the America's Cup competition, he does so at the expense of his love affair with Kate Bass, a longtime sailing partner. She walks out, making it clear that she can't tolerate a relationship where one person wins at the expense of another.

During the critical race, Parker makes an error that results in the Americans losing the Cup to the Australians. Realizing that he needs Kate on his team to win back sailing's top prize, he hires her design firm to build a new boat. It's appropriate that they name the boat Geronimo, for he was the Native American who refused to give up even when all the odds were against him. Halfway through the competition in Australia, Parker choses Kate to be his tactician. She is back where she always wanted to be, only now they are equals who depend on each other.

Matthew Modine and Jennifer Grey are just right in the two lead roles. The emotional highs of Wind come in successive waves. Many are connected with the exhilaration of high-speed sailing. But most are delivered in the evolving beauty of the love relationship between Parker and Kate. 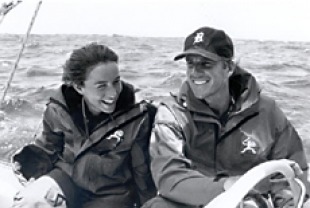