Directed by Garry Marshall
In its own light-hearted way, makes a good case for the spiritual benefits of service.

In Dear God, Greg Kinnear plays an artist and compulsive gambler who lands in court on fraud charges. The judge orders him to find a job and keep it for a year.

Luckily, a relative has connections at the post office. A philosophical supervisor (Hector Elizondo) there assigns Tom to the dead letter office. His co-workers include Rebecca (Laurie Metcalf), a burned-out lawyer; Herman (Tim Conway), a daft former carrier who bit a dog on his route; and Indris (Roscoe Lee Browne), a longtime post office employee awaiting retirement.

While sorting through letters sent to God, Tom reads one and in a moment of beneficence decides to send a needy woman some jewelry. He inadvertently includes in the package cash from his first paycheck. Meanwhile, a loan shark harasses him for monies owed.

Garry Marshall directs this comedy about the transformation of a cad into a caregiver. Tom's mission of mercy inspires his co-workers to become "the God squad," dispensing miracles to the hopeless and the down-and-out. Soon their acts of random kindness spawn others and the city of Los Angeles over the holidays is filled with more than good cheer.

Dear God, in its own slight and light-hearted way, makes a good case for the spiritual benefits of service. 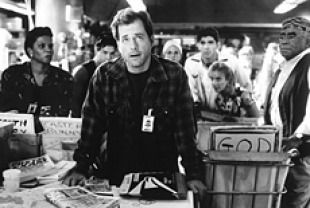