Directed by Kevin Costner
A shining parable about hospitality, a human resource that seems to be underrated and in short supply in our world rife with hostilities.

Kevin Costner's Dances With Wolves is a shining parable about hospitality, a human resource that seems to be underrated and in short supply in a world rife with hostilities between neighbors and nations. With a screenplay by Michael Blake, the film is set on the Dakota plains during the 1860s as white settlers began their westward journey into the homelands of Native Americans.

After an act of bravery during a Civil War skirmish, Lt. John J. Dunbar (Kevin Costner), a Union cavalry officer, is rewarded by a posting at his request in the West. He wants to see the frontier before it disappears. When he arrives with a wagonload of supplies at Fort Sedgewick deep in Dakota territory, however, he finds it completely deserted. Thankful for the opportunity to save the wilderness beauty, Dunbar begins a journal. His closest companions are a very smart horse and a wolf who wanders around at the periphery of the fort.

The Lakota people at their summer camp nearby are at first suspicious of this white man. When they learn that he is peaceful and even friendly, they begin to welcome this stranger in a series of intricate rituals. After he helps an injured woman and demonstrates his eagerness to communicate with them, they begin to reciprocate. Kicking Bird (Graham Greene), a holy man, initiates the dialogue. He convinces Stands With A Fist (Mary McDonnell), a white woman who was adopted by the tribe as a child, to serve as a translator. Dunbar's attentiveness to everything and his sensitivity win her heart. His bravery and honesty also impress Wind In His Hair (Rodney A. Grant), a fierce warrior. Dunbar, the stranger in a strange land, finds a community whose values enrich and expand his kinship with the land, its elements, and its animals.

Gradually, Dunbar begins to feel more at home with the Lakota than at the soldier's fort. He joins them for a buffalo hunt and plays a key role in defending the village when they are attacked by Pawnees. At one point, Kicking Bird says to Dances With Wolves: "I was just thinking that of all the trails in this life, there is one that matters more than all the others. It is the trail of a true human being. I think you are on this trail and it is good to see."

But times are changing on the great plains, and Dunbar eventually must make a very difficult choice.

This beautifully photographed and well-acted film is a very special cross-cultural resource that explores in sympathetic and salutary ways the ideals of hospitality, empathy, humor, and friendship. Best of all Dances With Wolves shows the trails we all must take to become true human beings. 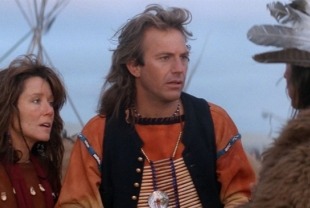