Directed by Richard Pearce
A drama set in Montgomery, Alabama during the 1955 bus boycott proclaiming that racial equality cannot be eased into effortlessly; it requires the rigors of change and commitment.

The Long Walk Home, directed by Richard Pearce (Country), proclaims that racial equality cannot be eased into effortlessly — it requires the rigors of change and commitment. Although the screenplay by John Cork is set in Montgomery, Alabama, during the 1955 bus boycott by the black community, the film's insights into the dynamics of racism and the fight for justice transcend the specifics of time and place.

Miriam Thompson (Sissy Spacek) is a suburban wife and mother of two daughters living in Montgomery, Alabama, in 1955. Her husband (Dwight Schultz) is a prosperous businessman with many friends in high places. Their lives consist of a constant stream of parties and family get-togethers. Odessa (Whoopi Goldberg) is Miriam's housekeeper. In addition to her kitchen chores, she looks after Miriam's youngest daughter Mary Catherine (Lexi Faith Randall).

When the black people of Montgomery decide to boycott the city's buses rather than continue to ride in the back seats, Odessa, her husband (Ving Rhames), and three children attend a church service where they are inspired by the solidarity of their friends and neighbors. Seeing the hardship endured by Odessa on the long walk to work, Miriam volunteers to pick her up twice a week after marketing.

As a "war of wills" divides the races, things escalate into violence, which touches Odessa's daughter (Erika Alexander) and son (Richard Habersham). At a Christmas meal with relatives, Miriam listens to the racial slurs of her brother-in-law (Dylan Baker) who is involved in efforts to break the boycott.

When her husband learns that Miriam has been driving Odessa to work, he orders her to stop. She responds by volunteering to drive for the car pool that shuffles blacks all over the city. When Miriam crosses the line at the car pool headquarters to stand with Odessa and other blacks against a crowd of violent white bigots, she knows she will have to pay a price for her commitment.

Odessa and Miriam break down the racial barriers that have been set up to keep them apart. One takes a moral stand on the basis of her involvement in the black religious community while the other listens to an inner voice that leads her to solidarity with those fighting bigotry and injustice. Both of these characters are moral mentors who help draw out our deepest feelings and beliefs about moral education, nonviolence, church, prejudice, empathy, conscience, and commitment. 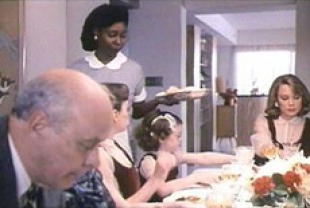