Directed by Abbas Kiarostami
A pioneering use of digital video and a wonderful parable about inner peace.

In his startling documentary ABC Africa, Iranian writer and director Abbas Kiarostami took this genre into new territory. Now with this innovative work, he raises the bar again for creative filmmakers around the world.

Ten consists of ten scenes shot in a moving car through the streets of modern day Teheran. A small digital video camera mounted on the bonnet of the vehicle catches an intimate look at the experiences of a woman, her contentious young son, and several other women she picks up on her drives around the city. All the performers are non-professionals. Although some will only praise the minimalist virtues of the drama, it is nearly impossible not to be swept away by the complex meanings which are woven into the 94 minutes of this extraordinary film.

The first 15 minutes revolve around a lively verbal battle between a mother (Mania Akbari) and her teenage son Amin (Amin Maher) as she drives him to a swimming pool. The camera is focused only on the boy as he tries to make his case against her. He cannot forgive his mother for divorcing his father, for marrying another man whom he considers to be a stranger, and for her selfishness. She calls him impolite and chastises him for not ever listening to what she has to say. As the argument heats up and their voices are raised, the mother grows more frustrated and senses that her son is just like his father.

In the second scene, Amin's mother is joined by her sister. They discuss the upcoming 39th birthday of the driver's new companion and friend, Amin's restlessness and anger, and whether or not the boy should be allowed to live with his father in the future.

In the next segment, Amin's mother picks up an elderly woman who visits the local mausoleum three times a day and prays for her deceased husband and 12-year-old son. She leaves her blessing ("May God grant your wishes") with the driver after unsuccessfully trying to get her to pray with her./p>

Amin's mother next encounters a prostitute at night who in her drunken stupor mistakes her for a man. She interrogates this woman about why she does what she does and whether or not she feels any guilt about her profession. The prostitute scores some telling points about the emptiness of many marriages and the way so many women cling to men as the only source of strength in their lives.

This session strikes some deep chords in Amin's mother that enable her to offer some wise counsel to two other women who have experienced heartbreak in relationships with men. She acknowledges the transcience of life and the losses we all must bear. Most importantly, she stresses the way self-love can serve as a boon even in the midst of melancholy. All of this leads to a final drive with Amin. She practices her newfound ability to let go of her expectations and plans for his future.

Kiarostami has created a parable about living in the present moment and taking what we can from each new situation. Amin's mother starts out in deep unhappiness allowing her son's criticism of her to rock her self-esteem. In her encounters with others, she acquires a sense of inner peace which enables her to allow things naturally to unfold. Ten is a marvel not only as a pioneering use of digital video but also as a winning parable about inner peace. 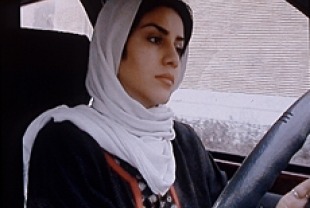