Directed by Pedro Almodovar
A multi layered film which centers around two men who have the gift of tears and the patience to explore the different delineations of love and compassion.

In the opening scene of Pedro Almodovar's 14th feature and follow-up to his 2000 foreign language Oscar winner All About My Mother, two men are seated next to each other at an avant-garde ballet performance by the Pina Bausch company in which two sleepwalking women move around the stage and are prevented from falling down or bashing into chairs by a male dancer. Benigno (Javier Camara) is deeply moved by what is happening in front of his eyes and when he turns to Marco (Dario Grandinetti), he sees that he is crying. The tears of these two men is their communal bond.

Benigno is a nurse at a private hospital who spends most of his time looking after Alicia (Leonor Watling), a ballet dancer who was injured in a traffic accident. She has been in a coma for four years. Through flashbacks, we learn that he has been in love with her since spotting her in a dance studio across the street from where he lives. Now Benigno lavishes her with attention and care, convinced that she can hear what he is saying and sense the love that is coming her way.

Imagine this nurse's surprise when he sees Marco at the hospital and finds out that he is visiting Lydia (Rosario Flores), a matador who was gored by a bull. Even though she is in a vegetative state, Benigno advises his new friend to talk to her. "A woman's brain is a mystery and even more so in this state," he tells him. Through flashbacks, we learn how Marco, a travel writer from Argentina, became enchanted with Lydia and her vocation as a matador. In one of the film's most magical scenes, her magnificent and tight-fitting ceremonial suit is put on her by a helper in a ritual that seems almost religious in its rigors and sense of awe. Marco blames his blooming relationship with Lydia as the cause of her fatal lack of concentration in the ring with the charging bull.

Talk To Her is a multi-layered film with the opening scene of the ballet to a night-time recital of Brazilian singer Caetano Veloso to a seven-minute silent film The Shrinking Lover. Although the Spanish director has specialized in movies about women, the two men are center stage here. They share what William James once called "the gift of tears." Joan Chittister explains just what lies behind this capacious term: "Of all the expressions of human emotion in the lexicon of life, weeping may be the most functional, the most deeply versatile. The tears we weep show us our deepest, neediest, most private selves. Our tears expose us. They lay us bare both to others and to ourselves. What we cry about is what we care about. What we have no tears for hardens our hearts."

Through a series of complicated turns in the storyline, Benigno and Marco are drawn closer together. A death, a suicide, and a miraculous recovery flow together in the last section of the film. Almodovar is an imaginative teacher of emotional intelligence. Talk To Me speaks volumes about the different delineations of love, compassion, and attention. 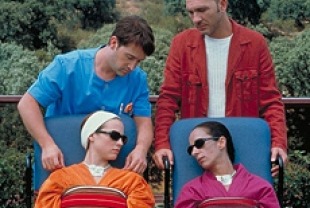