Directed by Mike Leigh
Depicts the valiant efforts of some working-class residents of London to pull themselves out of a dungeon of helplessness and hopelessness.

Poverty violates the mind, body, and souls of people. Its oppressiveness saps the energy of young and old alike. It can give rise to a toxic mixture of anger, resentment, and disappointment. Many try to escape it through alcohol or violence. Others just hide in a cocoon of helplessness and hopelessness. For those lucky enough to find work, it is usually in low level jobs that are terribly boring with no room for advancement. And as a final insult, the poor are forced to live in run-down housing that resembles a prison or concentration camp.

For years, English writer and director Mike Leigh has explored this terrible turf with unflinching honesty and an uncanny ability to respect the idiosyncrasies of his characters and the feisty ways they struggle to survive against the odds. In High Hopes, Naked, and Secrets and Lies, he probed the lives of the underclass in London. In All or Nothing, the setting is an ugly and rundown housing project where all of the main characters reside.

Phil (Timothy Spall) is an overweight cab driver who is experiencing a midlife crisis. He can't seem to muster the energy to get up early in the morning to get those fares to the airport. He also is convinced that his common law wife Penny (Lesley Manville) doesn't love him anymore. She works as a cashier at the local Safeway. Their two grown children are both obese. Rachel (Alison Garland) spends most her spare time reading and is employed as a cleaning woman in a nursing home. Rory (James Corden) is an angry young man who's unemployed and given to fits of rage which he rains down upon his mother.

Phil and Penny's neighbors include Ron (Paul Jesson), another cab driver whose wife Carol (Marion Bailey) is an alcoholic and whose daughter Samantha (Sally Hawkins) is hungry for sex wherever she can find it. Maureen (Ruth Sheen) works alongside Penny and is the only person in the housing complex who seems to have found a way of coping with the oppressiveness that has extinguished the light in her neighbors. She is buoyed by a good sense of humor and a fine singing voice as demonstrated at the local karaoke. Maureen takes charge when Rory is felled by a heart attack and is tender in counseling her daughter Donna (Helen Coker), a waitress who's just discovered that she's pregnant. Her abusive boyfriend Jason (Daniel Mays) wants nothing to do with her once he finds out that he is the father.

Penny's simmering disappointment with her lackadaisical husband comes to a head with Rory's health crisis. She is unable to reach him for hours; he has taken a break and gone to the beach to stare at the ocean. When he finally arrives at the hospital, she lets loose with her anger. Later, at home, Phil tells her that sometimes he just has to switch off when he's had enough. Penny responds that everyone is at the end of their rope and burnt out; yet very few switch off — they persevere. Phil apologizes profusely and suggests that the solution would be to take the whole family on a holiday. Penny wants nothing to do with that fantasy. Her husband finally gets the point and vows to work harder day by day. Hope is one of the few resources available to this family, and they reach out for it with renewed energy. 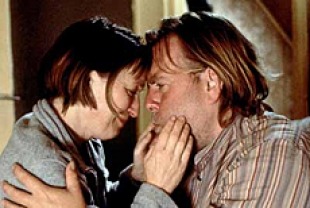