Directed by Gail Dolgin, Vicente Franco
A brutally honest documentary about a much anticipated family reunion that goes wrong thanks to culture shock and a refusal to empathize with others.

The term culture shock refers to the effect that immersion in an alien milieu has on an unprepared visitor. It is what a traveler may feel in India when confronted by large throngs of people everywhere. It is what an immigrant from a poor country may experience when first inside a huge grocery store in the United States. It is what happens when individuals find themselves adrift in a culture where familiar cues on how to act are missing and are replaced by new ones that are strange and sometimes unfathomable. This phenomenon lies behind much of the confusion and disorientation that overcomes many people in their dealings with people from societies other than their own. Culture shock often results in a failure to communicate, an erroneous reading of reality, and an inability to cope. This theme is explored in depth in Daughter From Danang, a documentary directed by Gail Dolgin and Vicente Franco.

In 1975 as the Vietnam War was ending, Mai Thi Kim sent her seven- year-old daughter Mai Thi Hiep from that war-torn country to the United States in "Operation Babylift," a program that gave Amerasian children, who faced death at the hands of the Viet Cong, a new lease on life. This frightened young girl who felt abandoned by her Vietnamese mother was adopted by a single woman, given the name Heidi, and raised in the South. Not looking very Asian, Heidi was accepted in the community of Pulaski, Tennessee, home of the Ku Klux Klan. Various friends and relatives speak of her upbringing and she herself proudly claims to be 101 percent Americanized.

However, by the time she's in her twenties, Heidi’s relationship with her adoptive mother has ended in a swift and irreparable separation. She decides to search for her Vietnamese mother and the unconditional love she expects to receive from her. She also wants to get in touch with her roots. Heidi finally connects with Mai Thi Kim, who has been trying to find her for years, through Tran Tuong Nhu, a consultant to the original "Operation Babylift" and a translator. She volunteers to accompany Heidi on the trip back to Vietnam and the reunion with her birth mother in Danang. Heidi's husband, an officer in the Navy, stays behind with their two children.

The first meeting between Heidi and Mai Thi Kim at the Danang Airport is a highly emotional moment for the two women who have not seen each other for 22 years. The American visitor is delighted to meet her half-brother and two half-sisters as well as Kim's husband, who fought with the Viet Cong during the war. The reunion continues with elaborate meals and a journey to the place where Heidi was born and the shrine of her deceased ancestors. But she grows more and more ill at ease with Vietnam and the customs of her relatives. Culture shock overtakes her one day in a market where she declares she wants nothing more than to go home as soon as possible.

This feeling of disconnection from her Vietnamese family comes to a climax in a farewell party where her half brother speaks directly to a subject that Heidi does not want to deal with at all. She is clueless about how family obligations are at the core of traditional Asian moral codes. She brings an American attitude that money matters are best not talked about and can only interfere with genuine family relationship. The documentary's chilling finale speaks volumes about the ways in which so many Americans are unwilling to take seriously the gap between the world's haves and the have-nots. 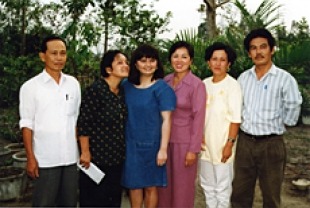