Power and Terror: Noam Chomsky in Our Times

Directed by John Junkerman
An enlightening documentary in which this 74-year-old MIT linguist and political philosopher speaks out against all forms of violence.

This enlightening 74-minute documentary is directed by John Junkerman, an American living in Tokyo. It covers a series of talks given in the spring of 2002 by Noam Chomsky, the MIT linguist and political philosopher. There are also excerpts taken from an interview at his office in Cambridge. In the aftermath of the terrorist attacks of September 11, he put out a book, 9-11 (Seven Stories Press, 2001), which became a surprise bestseller. Since then this diminutive 74-year-old intellectual has been giving speeches all over the country about American power politics, war crimes, and terrorism. Chomsky's perspective is one that has not been heard very often in the mainstream media, outside of the messages of Ralph Nader and Michael Moore. "Everyone's worried about stopping terrorism," he says. "Well, there's a really easy way: Stop participating in it."

One of the most dreadful after-effects of the atrocities of September 11, according to Chomsky, has been the jump-start those attacks gave to the rapid acceleration of militarization and the undermining of democracy. This has been true not only in the United States but also in Israel where an even more harsh and aggressive campaign against Palestinians has moved full speed ahead. This critic of the Bush Administration points out that the "war on terrorism" doesn't make any sense when it does not include the violent military policies of the U.S. Chomsky helps us recall that the United States is the only country that was condemned for international terrorism and then rejected a Security Council resolution calling on states to observe international law. He is referring to the unlawful use of force for political ends in Nicaragua where tens of thousands of people died. Americans should not expect other countries to be held to a standard that does not apply to them.

Introducing Chomksy to an audience, a woman calls him "a voice of reason, conscience and intelligence." In this documentary he provides plenty of historical examples of the danger of power politics and the ease with which the media and the intellectual class have stifled criticism during times of war. Chomsky is zealous in the case he makes against violence, that of terrorist groups and that of armed interventions by nation states into the affairs of others. Whether talking about Nuremberg, the Turkish terrorism against the Kurds, or the thirty-five year occupation by Israel of the Palestinian territories, this committed scholar sets the record straight.

It is easy to see why Chomsky has been championed by peace and justice movements all over the world. He truly believes that civilized dialogue about politics and civic activism has made a difference in American culture. This optimism is something that is desperately needed in these anxious and dangerous times. 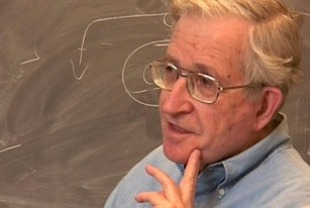