Directed by Lee Jeong-hyang
A wonderful Korean film that provides a tutorial on the miracles that can be wrought by unconditional love.

It is generally held that grandparent-grandchild relationships are free of the emotional intensity that characterizes parent-child interactions. Members of these two generations are able to relax with each other, having nothing to prove. They certainly have many riches to share, not the least of which is the pleasure of having a companion. But there are exceptions to the rule, and The Way Home certainly proves that. It is the second feature film of Lee Jeong-hyang, and this low-budget release has broken box-office records in Korea, even overtaking E.T. The Extra-Terrestrial.

Seven year-old Sang-Woo (Yoo Seung-Ho) is traveling with his mother from Seoul to a remote rural mountain village in Korea. She is experiencing hard times and has no one to turn to except her elderly mother (Kim Eul-Boon), who lives by herself. Sang-Woo immediately dislikes the place and doesn't want to stay. Nonetheless, his mother heads off to the city in hopes of returning for him in two months after she gets a job. Sang-Woo spends most of his time playing his Game Boy and treats his stooped over and mute grandmother with disrespect. He refuses to eat anything except the food his mother has left for him.

She doesn't quite know what to make of this spoiled brat whose moods are followed by temper tantrums. When his Game Boy runs out of batteries, he orders her to give him the money to purchase new ones. Realizing that she doesn't have the money he kicks over a vase and hides her shoes so that she is forced to get water on a stony path in her bare feet. Sang-Woo steals the only precious thing his grandmother possesses, her old-fashioned hairpin which he intends to use to purchase the new batteries.

The city slicker kid desperately misses all the things he took for granted in Seoul. In one of the most touching scenes, his grandmother discovers that he wants to eat Kentucky Fried Chicken. She prepares a chicken meal for him but he wants the fast food he's used to eating at home. Sang-Woo not only has trouble relating to his grandmother, he also looks down his nose at another boy in the community and pulls several pranks on him. Most of his attention is focused on a young girl who takes no interest in him whatsoever. Slowly Sang-Woo begins to see the drawbacks to his selfishness.

Writer and director Lee Jeong-hyang has fashioned a simple and satisfying drama about the healing power of love. Throughout all the taunts, tricks, and temper tantrums, Sang-Woo's grandmother keeps reaching out to the young boy and never once puts him out of her heart. This unconditional love is something he is unfamiliar with and eventually it begins to soften his hard heart. He apologizes to the boy he offended and slowly opens up to his grandmother. She, in turn, is a living embodiment of the spiritual practice of hospitality, always putting the needs of her guest above her own. The Way Home is a wonderful tutorial in the miracles that can be wrought by unconditional love. 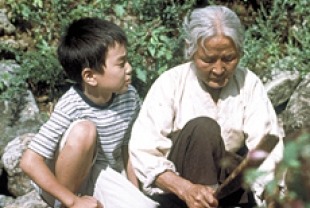