Directed by Phillip Noyce
An Australian spiritual adventure story about three courageous Aboriginal girls and their yearning to return home.

In 1931, three Aboriginal girls — fourteen year-old Molly (Everlyn Sampi), her eight-year-old sister Daisy (Tianna Sansbury), and their ten-year-old cousin Gracie (Laura Monaghan) live near the small depot of Jigalong on the edge of the Gibson Desert with their mothers and grandmother. They are learning tribal lessons passed down through the generations. In one scene, Molly's mother (Ningali Lawford) points to a bird flying overhead and says: "That's a spirit bird, he will always look after you." The white fathers of the three girls have abandoned them and moved on.

In Perth, A.O. Neville (Kenneth Branagh) holds the position of chief protector of Aborigines in the state. By his title, you might expect that his task would be to maintain the culture, rituals, and integrity of Australia's indigenous peoples. The truth is far more crude and appalling: his job is to implement and supervise the removal of half-caste children from their mothers and send them to a facility where they are trained to do domestic labor. The underlying goal is to have these children forget their language and customs and become completely assimilated into white culture. In a slide presentation given to some supporters, Neville outlines his racial theory that it will be possible "to breed out the color" from half-castes within three generations by overseeing their marital unions.

When Neville learns of the three Aboriginal girls in Jigalong, he orders Constable Riggs (Jason Clarke) to forcibly remove them from their mothers and to put them on a train for Moore River Settlement 1200 miles away. Arriving there still wincing from the pain of being separated from those who love them, the girls are put in a dormitory with other half-caste children. The nuns who run the place make it clear that they must speak English and not the "jabber" they spoke at home. They must also attend church. During a visit by Mr. Neville (who is called Mr. Devil by the children), Molly's skin is checked, and it is determined that she will not be sent to an advanced school for those with whiter complexions. A girl who ran away to visit her boyfriend is returned by Moodoo (David Gulpilil), an aboriginal tracker who works for the school. She is beaten and locked in a shed.

Molly soon hates the place and the people who run it. Confident that she can make it back home on foot, she convinces Daisy and Gracie that they must escape. After noticing a brewing rain storm, they run away into the bush; the rain washes away their tracks. But Moodoo is soon on their trail. Molly eventually heads for the rabbit-proof fence that bisects Australia north to south and is designed to keep rabbits out of farming land. She knows the fence runs through Jingalong. In one poetic and poignant moment, the children hold on to the fence and telepathically commune with their mother and grandmother.

On their arduous trek through the rugged countryside, the girls rely upon the kindness of strangers — a white woman who gives them food and a former inmate of the Moore River Settlement who hides them in her room for a night. Meanwhile back in Perth, Neville is humiliated by the escape of the three little girls especially when the authorities are not able to capture them for months. Even Moodoo is impressed with the physical endurance of the escapees and their cleverness in eluding the authorities.

This extraordinary film is directed by Phillip Noyce based on a book by Doris Pilkington Garimara, Molly's daughter. In the last scene in Rabbit-Proof Fence the real Molly and Daisy appear on screen and we learn about their lives since their daring journey home. The film has caused quite a stir in Australia where the kidnapping of half-caste children was practiced until 1971. These unfortunates have been called "the Stolen Generations." At one point, Neville states that the aboriginals "have to be protected against themselves. If only they would understand what we are trying to do for them." The same kind of insidious paternalism was at the heart of the efforts of whites to improve the lives of Native Americans through various assimilation programs.

It's a terrible thing to be dominated and forced to give up all that is sacred to you. Molly's ace in the hole is her spirit bird and the potent energy of those who love her. Those key elements are what make this Australian film such a wonderful spiritual adventure story — and one of the best films of the year. 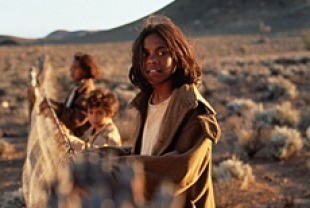