Directed by John Musker, Ron Clements
A spiffy outer space drama in which an unruly teenage misfit comes into his own as a creative and responsible young man.

Young Jim (voiced by Austin Majors) is captivated by the storybook adventures of Captain Flint, a space pirate who steals a cargo of solar crystals and hides them somewhere in the furthest reaches of the galaxy. Twelve years later, the adolescent Jim (Joseph Gordon-Levitt) is an unruly kid who is always getting into trouble. His mother (Laurie Metcalf) is raising him on her own since her husband walked out on them years ago. She runs an inn.

Their lives are turned upside down when Billy Bones (Patrick McGoohan) arrives from outer space with a metal sphere containing a holographic 3-D map leading to the Treasure Planet where Flint's crystals are rumored to be stored. Jim always told his mother that the story was true but she was skeptical. She becomes a believer when Long John Silver (Brian Murray) and his band of pirates arrive at the inn in search of the map. Doctor Doppler (David Hyde Pierce), an astrophysicist who is yearning for adventure, convinces Jim's mother to let her son accompany him to Treasure Planet. He tells her that the trip could turn out to be a two-month character-building experience for the restless yet very bright boy.

They hire a space ship under the command of Captain Amelia (Emma Thompson), a persnickety but competent woman. The first mate, Mr. Arrow (Rosco Lee Browne), has assembled a crew consisting of Long John Silver and his cronies. Naturally, Jim is the one who is forced to deal with the mutiny aboard ship. The gifted boy, who only wants to prove that he's not a loser, develops a love/hate relationship with Silver. At one point, this craggy veteran of outer space tells Jim: "You've got the making of greatness in you." The boy is given a chance to show his stuff on Treasure Planet when he comes across a chip-damaged robot named B.E.N. (Martin Short) whose memory is on the blink.

Writers and directors John Musker and Ron Clements have done a fine job adapting Robert Louis Stevenson's classic into an animated feature. The unusual relationship that develops between the pirate and the young adventurer is what gives Treasure Planet its special charm and interest. Sometimes we just never know who will arrive in our lives and give us just what we need to become all we were meant to be. 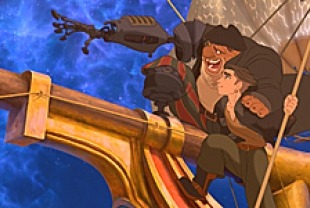