Directed by Bruce Beresford
A touching Irish drama about a nurturing father's strenuous efforts to keep his family together.

William's Doll by Charlotte Zolotow is about a little boy who asks for a doll. His panicked father goes out and gets him a baseball mitt and other "masculine" toys. But William still wants a doll. His grandmother is the only one who understands. She explains that William wants a doll so he can learn how to be a father.

Many experts have pointed out that most men want to be good fathers but many of them are not aware of what they can do besides being good providers. Evelyn is a touching drama set in Ireland in 1953 about a man who wants nothing more than to be present in his children's lives. Paul Pender has written the screenplay which is based on a true story. Bruce Beresford is the director.

Desmond Doyle (Pierce Brosnan) lives with his wife and three young children in Dublin's Fatima Mansions housing estate. He's unemployed and, although he is devoted to his children, he drinks a lot. When his wife leaves him for another man, Desmond hasn't got a clue about what to do. To earn some money, he starts singing at a local pub with his father playing fiddle behind him. But the courts decide that he, without a woman in the house, he is not able to properly care for his children. His daughter and his two boys are sent off to different orphanages run by the Catholic Church.

Evelyn has her father's spunk along with a deep streak of independence. She doesn't much care for the authoritarian nuns but luckily finds one who is both kind and understanding of her plight. To cope with her loneliness and acute sense of loss, she remembers what her grandfather once told her. He described the rays of the sun as a guardian angel sent to watch over her. Again and again, Evelyn turns to this image; it becomes her spiritual practice.

Desmond, in the meantime, has decided that he must reunite his family, even if it means taking the Minister of Education to court. Bernadette (Julianna Margulies), a barmaid at the pub where he sings, recommends that he see Michael Beattie (Stephen Rea), a jurist. Although Beattie is quite pessimistic about their chances in court, things look up with Nick Barron (Aidan Quinn), an Irish American, joins their team. But the real momentum in the case comes when they enlist the help of Thomas Connolly (Alan Bates). This retired barrister, who was once a star rugby player, is an eccentric who loves being the underdog. He's also a legal wizard. He argues that the law that allowed the courts to take away Desmond's children goes against the Irish constitution. The case has to be decided by no less than the Supreme Court of Ireland.

Pierce Brosnan, who is also co-producer of Evelyn, gives a rousing performance as Doyle, a father who takes his nurturing responsibilities so seriously that he stops drinking. Sophie Vavasseur is just plain wonderful as his spirited and very smart daughter. Alan Bates, as usual, is a delight to watch as the oddball barrister. And Bruce Beresford, who in his previous films Tender Mercies, Crimes of the Heart, Driving Miss Daisy, and Paradise Road demonstrated a knack for imbuing intimate dramas with grace and fluidity, has done it again. Evelyn is a beautiful tribute to fatherhood.

The DVD edition contains two 20-minute featurettes: One details the background of the actual case; the other, the making of the movie. In an audio commentary, actor/director Pierce Brosnan and producer Beau St. Clair reflect on the six years it took to get the film made and why it was worth the time and effort; in a second audio commentary, director Bruce Beresford praises the actors and their work in the film. 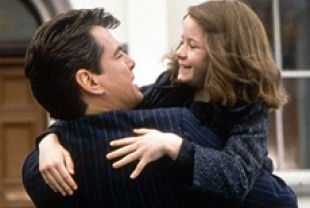