Directed by Roman Polanski
The survival of a Jewish musician during a harrowing five years in Warsaw during the German occupation.

As a child in Poland, film director Roman Polanski hid from the Nazis after escaping the Cracow Ghetto through a hole in the barbed-wire fence. Over the years since the war, he has looked for a story that would convey some of the things he experienced. Then he came across the autobiography of Wladyslaw Szpilman, a Polish Jew who survived the Warsaw ghetto. Polanski called upon Ronald Harwood (The Dresser) to write the screenplay. The Pianist won the Palme d'Or (Best Picture) at the 2002 Cannes International Film Festival.

During the German invasion of Poland in 1939, renowned pianist Wladyslaw Szpilman (Adrien Brody) is in a Warsaw radio station performing Chopin's "Nocture in C-sharp Minor" when the bombs start falling. Although the technicians run for cover, he keeps playing until a blast shatters the window of the studio. At home, his parents (Frank Finlay and Maureen Lipman) are packing to leave the city but Wladyslaw's brother (Ed Stoppard) and two sisters (Jessica Kate Meyer and Julia Raynor) believe there is no need to do so, given the radio reports that England and France have declared war on Germany. However, this upper-class and cultured family is disheartened when the Nazis march down the streets of Warsaw.

Soon the inconveniences of not being able to eat here or to walk there are magnified into the wearing of the notorious armbands and the ignominy of being herded with thousands of other Jews into a walled-off ghetto. Wladyslaw is able to find work playing piano in a restaurant that caters to black marketers, and he's makes some valuable contacts, including a member of the resistance who gets his father a work permit. But all is for naught when in August of 1942, the Nazis begin rounding up Jews for "deportation." As all the members of his family are herded into a freight car, Wladyslaw is pulled out of the line by a friend in the Jewish police. He is put to work doing grunt labor for the Nazis.

Up to this point in the drama, Polanski and Harwood have given us little that we are not already familiar with from countless other Holocaust films. The last portion of The Pianist focuses on Wladyslaw's isolation and loneliness in Warsaw over a three-year period. After escaping from the ghetto, he contacts the resistance and is shuttled from one vacant apartment to another where his presence has to be kept secret. He is totally dependent on the ministrations of those bringing him food and news. From the windows of one place, he does witness the Jewish uprising in the Warsaw ghetto. Later, while hiding in the ruins of the bombed-out city, he is discovered by a Nazi officer (Thomas Kretschmann) who decides to spare him once he hears him play the piano. He brings him food and even gives him the coat off his back.

Many kindnesses of quite ordinary yet very courageous men and women enable Wladyslaw to survive the war and resume his life as a musician. Sadly enough, Adrien Brody's performance keeps such a tight rein over his character's emotions that there is little evidence of his gratitude for all that has been done for him. 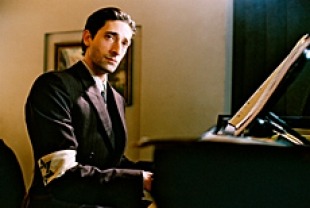