Directed by Menno Meyjes
An intriguing piece of speculative fiction about Adolf Hitler's artistic endeavors and the genesis of his hostile imagination.

"Hate is difficult to discuss. The mind resists it. The subject is amorphous, disorderly, malignant. . . . The reason the subject is hard to discuss is that hate is simultaneously a mystery and a moron. It seems either too profound to understand or too shallow and stupid to bear much analysis," essayist Lance Morrow has written. While hundreds of books and films have focused on Adolf Hitler, this intriguing piece of speculative fiction on his early artistic endeavors offers an unusual slant on him. Writer and director Menno Meyjes exposes the rabid racist and angry young man whose passions and prejudices would lead to the genocide of millions of Jews in Europe.

Max Rothman (John Cusack) is a German Jew and World War 1 veteran living in Munich in 1918. Having lost his arm in the war, he can no longer paint and has become an art dealer. In a former factory, this ambitious young man exhibits paintings by George Grosz and other modernists who are exploring Dadaism, Cubism, and Surrealism. Rothman's parents are very rich, and his beautiful wife Nina (Molly Parker) is a ballerina. He also has a lover, an artist named Liselore (Leelee Sobieski).

This wheeler-dealer sees himself as a patron to struggling artists. When he first meets Adolf Hitler (Noah Taylor), he feels a connection to him because they both had their lives shattered by the war. Adolf is an angry fellow with a perpetual scowl on his face. He doesn't smoke, drink, or use drugs. He is living in poverty at an army installation and feeling very deprived. Max's interest in his sketches momentarily lifts Hitler's spirits, but his rage about the wealth and privilege of the Jews, fed by Captain Mayr (Ulrich Thomsen) and other malcontents, gets in the way of his art. At one point, Max tells the aspiring artist that if he could get all that "pent-up stuff" inside him on canvas, many possibilities might unfold. Liselore doesn't share her lover's interest in Hitler; she tells him that he's "the most horrible creature I've ever seen."

The insight that hatred is at once a mystery and a moron is vividly portrayed in this adventuresome film. In Hitler, the two are fused together in such a way that Max is unable to see clearly the true dimensions of this man's anti-Semitism. It comes to the fore when Captain Mayr calls upon Hitler to give a speech before a gathered assembly of Germans enraged over what they see as the injustices of the Versailles Treaty and the humiliation of their homeland. Hitler digs deep within himself and expresses his passion in a feverish outpouring of rage against the Jews. The emotional response of the crowd convinces him that he has at last found an outlet for his energy and creative ideas about the future of Germany.

Prejudice is a disease of the mind in which we project our feelings of self-disgust, anger, alienation, and paranoia on others whom we perceive to be different. Max offers a terse and tense primer on what Sam Keen has called "the hostile imagination." 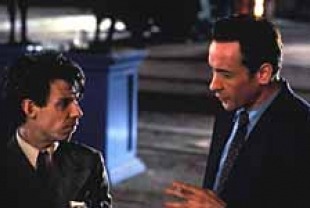