Directed by Susanne Bier
A poignant and well-acted Danish drama that shows how strangers can transform our lives in ways beyond our wildest imaginings.

Cecilie (Sonja Richter), a cook, is madly in love with Joachim (Nikolaj Lie Kass), a twenty-five-year-old who is working on a degree in geography. In the opening scene, he presents her with an engagement ring. At home, they argue about a mountaineering trip he is about to take. She's worried about his safety. The next day, he absent-mindedly exits the car after kissing Cecilie goodbye and is hit by another vehicle driven by Marie (Paprika Steen). It turns out that she's just had an argument with her teenage daughter, Stine (Stine Bjerregaard), who is about to celebrate her birthday. Joachim is taken to the hospital, and his condition is deemed very serious. Although the doctors do all they can for him, he has a spinal injury that paralyzes him from the neck down.

One of the doctors is Niels (Mads Mikkelsen), who is Marie's husband. Besides Stine, they have two young sons. He tries to console his wife, who blames herself for the accident. When he meets Cecilie, she is in a state of shock and unable to handle the news that her financé will never walk again. In one instant,their dreams have vanished. Joachim is so angry about the hopeless condition of his body that he turns away from Cecilie. She can't believe he doesn't want her help or need her love. She turns to Niels for compassion, visiting with him at the hospital and then inviting him to her apartment. He is willing to be a sensitive counselor at first since she has no family or friends to turn to. But then Niels falls in love with Cecilie, and she accommodates his ministrations, even when they turn sexual.

Susanne Bier directs this engaging love story, the official Danish nominee for Best Foreign Language Film at the Academy Awards. Open Hearts was made according to the Dogme rules that have governed such recent cinematic efforts as The King Is Alive and Mifune; one of them is that only natural light is used. The screenplay by Anders Thomas Jensen, based on a concept by Bier, explores the idea that the strangers we meet can alter our lives in ways beyond our imagining. Or as Rav P. S. Berg, a teacher of the Kabbalah, puts it "Every encounter with a stranger is a time to start over."

It is fascinating to watch Niels's compassion slowly and subtly change to lust as he becomes the main person in Cecilie's life during her period of shock and grief. The two of them reach out for each other but once they have stepped over the line, neither has any idea what to do about it. Their situation is complicated when Stine finds out about their love affair and then Joachim changes his mind and wants Cecilie back.

The ending is perfectly fitted to the mysteries that draw the cook and the doctor together. These strangers have transformed each other's lives, and there is no turning back for either of them. Open Hearts is a poignant drama that hits the mark with its many layered exploration of love and loss. 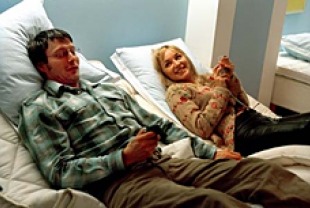