The Yogis of Tibet: A Film for Posterity

Directed by Phil and Jo Borack
An extraordinary film that salutes the spiritual disciplines and practices of Tibetan yogis who have mastered their minds and bodies as part of their devotion to the dharma.

There has never been another culture and society quite like the one that existed in Tibet before the Communist takeover of the country in 1950. This extraordinary film was written by Barbara King and produced by Phil and Jo Borack with the cooperation of the monks of the Drikung Kagyu Tradition.

In the opening segment, the narrator describes the spiritual dimensions of life in this nation on top of the world. Its first inhabitants were nomads. Due to the harsh elements and the impermanence of life, they turned inward for peace. The Buddhism that developed in Tibet was organized around meditation and other practices and rituals. At one point, there were 6,000 monasteries, and one in every six males was a monk. Life in this country of prayer wheels and prayer flags literally revolved around the practices of the people.

The monastery monks not only perfected spiritual disciplines but studied science, philosophy, the arts, and medicine. The filmmakers define a yogi as "an individual who has spent years in isolated retreats practicing secret self-transforming physical and mental exercises, and through these techniques has developed extraordinary control over both mind and body." During the Chinese takeover, one million Tibetans were killed; many of them were yogis. Realizing that their tradition and impact on the future is now limited, some of these mind masters decided to share a few of their secret beliefs and practices with the world. They include H.E. Choje Togden Rinpoche, H.E. Garchen Rinpoche, Ven Drubwang Konchok Norbu Rinpoche, H.E. Chetsang Rinpoche, and H.H. the Dalai Lama.

Several yogis discuss teachings passed down through the generations about meditation, controlling the mind, and rising above the physical plane of existence. How do they differ from monks? Due to the rigors of their one- to three-year retreats in isolation, they are able to work more diligently on training their minds, controlling their bodies, and dealing with negative emotions. In a fascinating scene, a young yogi demonstrates a demanding breathing exercise which takes two years to learn and then must be repeated for two hours every day. Other yogis talk about their paranormal abilities and experience of teachers who achieved amazing feats in their deaths. These accounts are rendered with utmost seriousness so as to avoid ego-centered showmanship.

The last section of the film focuses on the spiritual practice of compassion. The Dalai Lama tells about a Tibetan monk imprisoned by the Chinese who felt that the only danger he experienced was when he stopped loving his enemies. American Buddhist teacher Robert Thurman has called Tibetan monks and yogis "supreme artists of life." No wonder they are spreading the dharma all over the world. Yogis are now teaching in the United States, and their mind control techniques and example of inner freedom and peace continue to earn the respect of their students. This inspiring and edifying film allows an even wider audience to appreciate the special spiritual gifts of the yogis of Tibet. 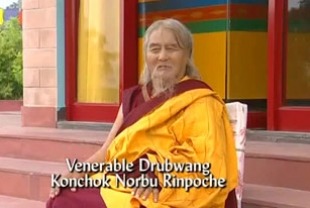