Directed by Steve James
A wrenching documentary by the filmmaker of Hoop Dreams about his complicated relationship with a troubled young man arrested for molesting an eight-year-old girl.

In the early 1980s filmmaker Steve James (Hoop Dreams) became a Big Brother to Stephen Dale Fielding, a troubled teenager in Pomona, Illinois. Then after 1985, he dropped out of the boy's life for a decade while he pursued his filmmaking career. When he decides to look him up again, Stevie has become "Snake" with tattoos on his arms, a love of motorcycles, a prison record, and an expanding rap sheet. He doesn't work much, lives in a squalid trailer, and has a devoted girlfriend, Tonya, who stands by her man because he makes her feel special. According to Stevie, all of his troubles stem from his mother, Bernice, who abandoned him as an illegitimate child on the doorstep of his stepmother, Verna, who raised him but then had to give him up to a series of foster homes. Now he lives near her and his stepsister Brenda, who takes care of his finances.

This bold documentary, which was shot over the course of five years, covers the continuing messes in Stevie's life and his love/hate relationship with his family. The filmmaker soon finds himself playing a major role in unfolding events when his "Little Brother" is arrested for sexually molesting his eight-year-old cousin while babysitting her. James has mixed feelings about how to act or whether or not to continue the film in light of what has happened. He believes Stevie is guilty and is nervous about having him around his own young children.

James does captures some pleasant moments in this angry young man's life, such as when he shows us a clock that has different animal sounds for each hour of the day or when he's fishing with a friend. But Stevie's rage against his mother is unrelenting. Then miraculously, Bernice, who beat him when he was young, seems to mellow. She joins a church and tries to reconcile with her son. She even manages to convince him to get baptized.

Things seem to be going well for Stevie when he takes Tonya on a trip to Chicago. But then after years of legal twists and turns, his case is scheduled before a judge. He is found guilty and sentenced to ten years in prison. The judge admits that he would have only given him six years if Stevie had confessed some remorse for his crime.

In his excellent documentary Hoop Dreams, Steve James demonstrated a sensitivity to the complex emotions exhibited by young men who were pursuing the dream of playing professional basketball. In this wrenching work, he is an exemplar of the spiritual practice of being present. Without judgment, this Big Brother stands by Stevie through a continuing series of troubles and fumblings. He wants to help him out but is savvy enough to realize that no one can save another person. Near the end of the documentary, he learns that Stevie is writing poetry in prison and taking an interest in the dramas of Shakespeare. On the way to visit him, Steve James humbly admits, "The best I can do is just try to be there for him." 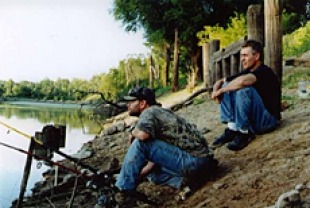