Directed by Ed Solomon
A powerful and poignant drama about a repentant murderer's quest to make amends with the sister of the person he killed years ago. This fresh exploration of forgiveness touches the heart.

Manual Jordan (Billy Bob Thornton) has served 22 years in prison for the murder of a 16-year-old clerk in a convenience store robbery. He still carries the burden of guilt over this senseless act of violence committed when he was just an impulsive boy. When the parole board commutes his sentence and tells him he is free to leave, a part of Manual wants to stay. He thinks he belongs in prison.

Back on the streets of the city where he once lived, Manual bumps into an old acquaintance (Dorian Harewood) who wants him to team up on a robbery. But the newly freed man is not at all interested. He has other things on his mind. Like making things right with the sister of the boy he killed.

By chance, Manual meets Miles Evans (Morgan Freeman), a preacher who runs a community center opposite a popular all-night dance club frequented by youth. He gives him a place to stay and a job as a custodian. Manual puts his meager belongings in his room and hangs a newspaper picture of Abner Easley (Luke Robertson), the boy he killed, on the wall. He contemplates it and thinks about what he once heard about the five steps to making amends: acknowledging what you have done, feeling remorse, trying to make it right with someone wronged, trying to make it right with God, and acting differently when you find yourself in the same place and situation. Although he doesn't know if he even believes in God, Manual definitely buys into this process for forgiveness.

He locates Adele Easley (Holly Hunter), his victim's sister, and becomes friends with her, offering to carry her groceries and be of service in other ways. He tries to find the right moment to tell her who he is and why it is so important that he do something positive for her. But whenever the moment seems right, he finds himself tongue-tied. She is a lonely woman who has over the years been depleted by all the grief and loss in her life. She feels that she's failed as a mother to her son Abner (Geoffrey Wigdor), who has gotten in with a violent crowd. When he is shot by a member of a rival gang, he vows revenge. Adele asks Manual to talk him out of it.

Writer and director Ed Solomon wrote the screenplays for Men in Black and the two Bill & Ted films. In this parabolic work, he zeroes in the difficult theme of forgiveness. There are only nine words that could change the world, according to Rabbi David Zeller: "I'm sorry. I made a mistake. Please forgive me." The lead character has very little patience for religion or for God, yet he has an intuitive sense of one of the imperatives of restorative justice: criminals who have taken a life must do something to make amends to those who have suffered because of them.

Billy Bob Thornton plays Manual as a man of sorrows and grief. In one scene, he walks slowly through a long corridor, clearly separate from the other urban dwellers rushing him by. At the community center, he stands apart with his silence, his formal speech, and his reluctance to put himself forward. Yet his interactions with Adele are tender and touching as he clumsily tries to help her get through to her son.

A subplot reveals how Manual stumbles into being a transforming influence in the life of another young person. Sofia Mellinger (Kirsten Dunst), a regular at the dance club, is a hedonist on a path of self-destruction with booze and drugs. Knowing a lot about self-hate, the ex-con challenges her to get herself together before it is too late. He doesn't see this as an restorative act, but we do.

Levity is a powerful and poignant drama that expresses the truth that we cannot make amends until we experience the pain that we have caused ourselves and others. Solomon gives this story an ending that signals his understanding of the complexity of the journey from guilt to restorative justice to forgiveness. It is not simple, and it is not easy. But as Manual discovers, it can free a troubled soul.

The DVD includes a commentary track with writer/director Ed Solomon, editor Pietro Scalia, and producer Adam Merims. Solomon is also prominent on the featurette, along with the key actors. Both times he conveys his commitment to the themes of the project and his inspiration — tutoring in a prison. 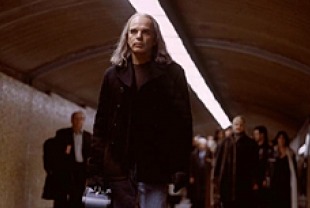 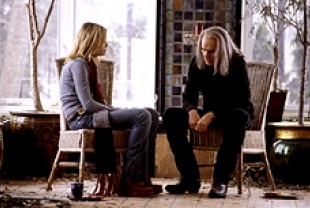