Directed by Neil Jordan
A stylized heist film with a stunning performance by Nick Nolte that celebrates the whimsical moves of Lady Luck in the lives of those who have nothing to lose.

"Always play the game to the limit, and damn the consequences" is the motto of Bob Montagnet (Nick Nolte), a gambler and thief who has run out of luck during his stay in Nice, France. He is feeding his heroin habit when he meets Anne (Nutsa Kukhianidze), a 17-year old in danger of being snatched up by Remi (Marc Lavoine), who runs an illegal gambling joint and has a string of prostitutes working for him. When the place is raided, Bob saves the life of Roger (Tcheky Karyo), a detective, by disarming Said (Ouassini Embarek), a young Algerian drug dealer.

Despite his run-down condition, Bob has many friends and a certain charm which is endearing to Anne, who eventually takes him up on his offer to stay at his place. Paulo (Said Taghmaoui), Bob's errand boy, takes quite a fancy to her. Meanwhile, the compulsive gambler loses big at the race track. His buddy Raoul (Gerard Darmon) drives him to Monte Carlo and proposes a casino robbery. The target is a collection of paintings stored away in a vault by the new Japanese owners. Raoul reveals the best part of the proposed heist: Vladimir (Emir Kusturica), who installed the security system for the vault, is willing to work with them.

Bob is so excited about the prospect of one last big spree that he decides to beat his drug habit with a three-day chill-out while chained to his own bed. Arising a new man, he makes a plan that involves setting up two robberies, the real one involving the paintings and the phony one involving the casino safe. He assembles his gang, which includes Philippa (Sarah Bridges), a friend who has had a sex change and is terribly frightened of spiders. To finance the operation, Bob leases his Picasso painting to Tony Angel (Ralph Fiennes), an English fence and art dealer. He loves telling the story of winning the painting on a bet with the famous artist at a bull fight in Pamplona: "Pablo bet on the matador; I bet on the bull. The matador got twenty-six stitches; I got the painting."

Neil Jordan has written and directs this quirky drama loosely based on Jean Pierre Melville's 1955 French film titled Bob Le Flambeur. He has drawn out a stunning performance from Nick Nolte as the bedraggled and romantic Bob who blabbers on about gambling, numbers, and art. His hero is Pablo Picasso, whom he describes as the best thief that ever lived since he borrowed from hundreds of other artists in order to achieve his distinctive style. Bob also sees himself as a good thief destined for the same deliverance as Jesus gave to the thief next to him on the cross. This dreamer believes that Lady Luck will eventually bless him.

The Good Thief is a very stylized film, something one would expect from Neil Jordan whose films include The Crying Game, Interview with A Vampire, Michael Collins, The Butcher Boy, In Dreams, and The End of the Affair. Check out the stop-motion camera work of Chris Menges and the lively soundtrack which includes pop tunes by Leonard Cohen, Johnny Hallyday, and Bono.

DVD "extras" include an audio commentary by always interesting director Neil Jordan, deleted scenes, and a featurette about the making of the film. 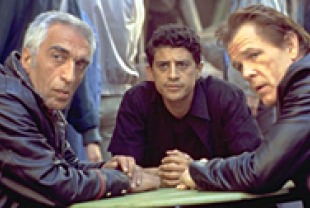