Directed by Justin Lin
An inventively delivered cautionary tale about some smart and upwardly mobile Asian high school students who, bored with their lives, embark on a course of violence and self-destructiveness.

"The longer I live," Robert Farrar Capon, a spiritual writer, has observed, "the more I think the major sin is boredom. Not blasphemy, which is making loud noises when you can't think of anything better to do; not even idolatry, because that's only a silly escape from the real to the artificial. The true menace to life — the root of the dangerous things we do — is being sick and tired. Wisdom is a firm resolve to be fed up with nothing except being fed up."

We agree, and youth are especially susceptible to this malaise given their restlessness, impatience, and yearning to have it all. Justin Lin is the writer, director, producer, and editor of this fast-paced and inventive film about some very smart Asian high school students who grow bored with their ease in academic achievements and extracurricular activities. Plenty of films satirize the blandness of suburbia as a seedbed for the waywardness of many youth. Better Luck Tomorrow shows what kinds of empty lives can be created by boys and girls who know how to use their brains but have little or no capacity for love or compassion.

Ben (Parry Shen in a sturdy performance) is a 16-year-old student at a California high school who is obsessed with getting into a prestigious university. He studies very hard, memorizes a new word every day to improve his language skills, participates in clubs during his lunch hour, and works part-time. He doesn't relate to the opposite sex very well but is absolutely delighted when Stephanie (Karin Anna Cheung), a cheerleader, turns out to be his lab partner. Then, he learns that she has a boyfriend, Steve (John Cho), who is a wealthy and attends another school.

Ben practices shooting buckets every day — his personal best is 215 in a row. Surprised when he is chosen for the school's basketball team, he spends most of the time on the bench. Daric (Roger Fan), another Asian student who is one of the most popular guys on campus, writes a newspaper article about Ben as the token Asian on the team. Ben is bothered by this exposure and quits the team.

Daric next talks him into preparing cheat sheets for school exams. When this project turns out to be successful, Daric ups the ante with selling drugs and stealing merchandise. Ben, who is bored, stays on board along with his buddy Virgil (Jason Tobin) and his streetwise cousin Han (Sung Kang). Soon their ambitious gang is thriving with a variety of operations in the school and in the community. Meanwhile, his enmity grows toward Steve when he discovers that he is dating another girl in addition to Stephanie.

Lin and co-screenwriters Ernesto M. Foronda and Fabian Marquez do a credible job depicting Ben's moral descent into dangerous territory all because he is bored with his life. The screenplay also shows how the competitive ethic leads down the slippery slope into violence. The brainy members of the gang see themselves as superior to the kids around them, and they feel entitled to special treatment. This leads to the fantasy that they can do what they want and not pay the consequences. Better Luck Tomorrow makes it clear that such an amoral perspective is rampant in contemporary America, not only among arrogant corporate executives but also among elite high school students and many others on all levels of society. 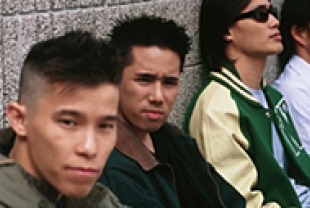