Directed by Jacques Perrin
A glorious celebration of birds in flight, conveying the beauty and the amazing feats of strength and endurance of their long distance journeys.

This glorious celebration of birds in flight begins as the following words appear on the screen: "For eighty million years, birds have ruled the skies, seas and earth. Each Spring, they fly vast distances. Each Fall, they fly the same route back. This film is the result of four years of following their amazing odysseys, in the Northern Hemisphere and then the South, species by species, flying over seas and continents."

Director Jacques Perrin and a crew of over 450 people used small planes, gliders, helicopters, and balloons to film migrating flocks from above, below, and alongside. This is an up-close-and-personal perspective like nothing you have ever seen. You can almost feel the breeze off the birds' flapping wings! Watching them, you may feel something akin to a dream state as they use the stars and sun as their only compasses on their long journeys.

The filmmakers follow bird migrations through forty countries and seven continents. Although there are no international borders to stop their annual flights, there are plenty of life-threatening challenges along the way. The birds must face rainstorms and blizzards, periods when there is nothing on the dry ground to eat, or a long flight over the ocean where a ship is a godsend for the exhausted travelers. In one of the most frightening scenes, some mountain birds hear a rumbling sound and barely escape an avalanche.

Human beings are both allies and enemies. A boy releases a goose whose foot has gotten caught in some webbing. An elderly European woman feeds some hungry birds in her field. But hunters also shoot down those in flight. A few unfortunate birds land near a factory and get stuck in the muck of toxic chemicals polluting a waterway. In the Amazon, a boat glides through the water carrying colorful birds in cages to sell. A beautiful blue parrot manages to undo the wooden latch on his cage and fly free. A mother bird nesting in a farm field has no chance to escape an approaching vehicle. And of course, there is no telling the detrimental impact of air pollution on the flocks flying through cities.

There are lighter moments: grebes skating across the top of a pond, pelicans dive-bombing into the ocean, proud parents with their off-spring riding on their backs as they swim across a pond. Time and again, we wonder how the larger flocks coordinate all the crowded and complicated take-offs and landings without any members of the party serving as air controllers.

Poet Coleman Barks reminds us that all the mystical traditions love birds and their singing: "Birds represent our longings for purity and freedom and they carry messages of ineffable joy." Gunilla Norris says she loves to watch flying geese in the wake of each other's wings, literally getting a lift from one another. Whenever she sees them, she thinks about the meaning of the communion of saints. As you watch this extraordinary documentary, your heart will take wing with these brave little beings and, undoubtedly, you will spot one or two that can be a spiritual teacher for you, telling you about life or death or something in between.

Although you'll want to watch Winged Migration straight through for the full impact, with the DVD you watch it again and listen to the director's commentary. You can revisit your favorite flocks through the scene selections (and you'll learn the names of all the different birds). The 50-minute "Making of" featurette is almost as interesting as the film itself, showing how the filmmakers were able to get the birds used to having humans around and even flying with them in light weight aircraft or following them on motorcycle or in high speed boats. A beautiful photo gallery, with informative notes by the director, adds yet another fascinating perspective to this experience. This is a DVD you'll treasure. 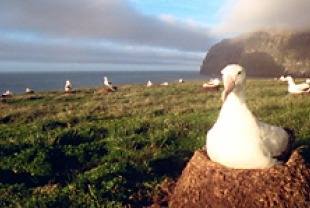