Directed by Larry and Andy Wachowski
A super-duper sci-fi thriller that reveals the human imagination as a saving force in the universe.

Thomas Anderson (Keanu Reeves) is a computer programmer by day and a hacker by night, known in cyberspace as Neo. His employer notes correctly that this young man has a problem with authority. Neo is on a quest to find Morpheus, a legendary hacker-outlaw who knows the answer to the big question on his mind: What is the Matrix? There is much talk about this in cyberspace but no one has really explained it.

Trinity (Carrie-Anne Moss) contacts Neo at a disco and warns him that he is being tracked by the authorities who believe Morpheus is the most dangerous man alive. Unable to outrun those who are after him, Neo is captured and interrogated by the nefarious Agent Smith (Hugo Weaving). A bug is planted in his body and later removed by Trinity as she takes him to meet Morpheus (Laurence Fishburne).

Neo is now given a choice. Morpheus offers him two pills. One will send him back to the life he's known; the other will enable him to enter an alternate world where he will learn about the Matrix. He chooses the latter, and the truth is almost more than he can bear. The world that he has considered real is actually created and run by advanced machines who depend upon a hive of hibernating womb pods containing sleeping flesh-and-blood humans as their energy resource. People to them are nothing more than batteries. The everyday world of urban buildings, busy streets, work places, and discos are a computer-generated dream world, "a neural-interactive simulation." Morpheus, however, is a free human and with a small band of compatriots, he is determined to protect the secret location of Zion, a human stronghold, and work to free their race.

This super-duper science fiction film, winner of four Academy Awards, is a pop postmodern treasure-trove of images and references from literature, religion, other movies, mythology, science, and technology. Directors Larry and Andy Wachowski, who also wrote the screenplay, have designed it so you can pick and choose your own thematic entry points and re-experience the drama again and again. For instance, the film can be seen as an exploration of the battle between machines and human beings. Note especially the speech by Agent Smith, one of the super-intelligent humanoid machines, to his arch-enemy, Morpheus: "There is another organism on this planet that follows the same pattern [as humanity]: a virus. Human beings are a disease, a cancer on this planet. You are the plague, and we are the cure."

Of special interest to Christians is an approach to the film that regards Neo as a Christ figure. In one of the early scenes, a hacker shows up at his door with some cash to purchase mescaline and says: "Hallelujah! You're my savior, man, my own personal Jesus Christ." Later after meeting Morpheus, Neo is told that he's "the One" they have been waiting for to liberate humans from their slavery. In one of the most fascinating moments in the drama, he meets the Oracle (Gloria Foster), an African American in her kitchen; she dishes out wisdom along with freshly baked cookies. This woman has been in the resistance movement since the beginning and has predicted the coming of One who will bring freedom to the people. The Oracle tells Neo:" You've got the gift but it looks like you're waiting for something."

She's right. This hero must first undergo more testing in the wilderness. He squares off with Cypher (Joe Pantoliano), a traitor within the resistance movement, and fails a leap of faith jump. The filmmakers swerve away from the essence of the Christian Gospel when they make this Christ figure into a liberator who uses excessive violence to achieve his goals. Like so many others, the Wachowski brothers can't get beyond the myth of redemptive violence, the traditional linchpin of American cultural history and a central message of many Hollywood movies. The life-restoring kiss that Trinity gives to the dead Neo is a touching image of love as resurrection but not even that healing scene can wipe away the disappointment we feel that blazing guns are proffered as the inevitable way to fight the evil ones in power.

Some viewers have identified Gnostic and Buddhist references in The Matrix, and this is another way to enter this story. Here Neo is a good- hearted man on the path to enlightenment who realizes that the suffering of the world is brought on by ignorance, greed, craving, and attachment. The tests and trials he undergoes in his martial arts training with Morpheus enable him to see the power of the mind to alter conditions and bring about change. A young boy waiting to meet the Oracle demonstrates this ability to think outside of the box.

In the climactic battle with Agent Smith, Neo's imagination and intuition enable him to bend and break the rules which the humanoid machines are unable to do. This scene holds the key to what makes The Matrix such an enthralling adventure on so many different levels. The vast and untapped potential of imagination is the force that can save the human race and release us from enslavement to ignorance and the follies of craving and attachment. Actually, the opening scene in the film sums up what it all is about. Neo is asleep in front of his computer. And on the screen it says: "Wake up, Neo."

The Matrix special edition two-disc DVD has hours of bonus features. Disc One has the original feature film plus commentary by star Carrie-Anne Moss, visual effects supervisor John Baeta, and editor Zach Staenberg. There are also several interactive features, two special effects documentaries, and a collection of essays and articles.

Disc two contains the complete behind-the-scenes two-hour companion film, The Matrix Revisited, plus more featurettes, samples of the audio music tracks, multiple stills galleries with more than 800 images, the music video by Marilyn Manson, and a preview of the sequel The Matrix Reloaded. 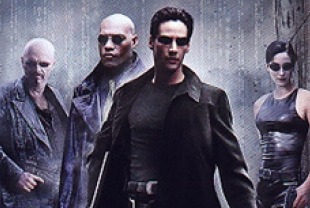