The Shape of Things

Directed by Neil LaBute
A hard-hitting drama by Neil LaBute that explores power plays between the sexes and important dimensions of the clash of art and morality.

Adam (Paul Rudd), a museum security guard, sees Evelyn (Rachel Weisz) breaking the rules by going behind a velvet rope surrounding a large male nude statue to snap some photos of his fig leaf covered penis. Talking to her, he finds out that she is an art student who is very angry that some nervous nellies of old were able to cover the crotch of this sculpture. "I don't like art that isn't true," she says.

The contrast between these two students at a California college is striking. She is pretty and self-confident; he is dorky looking and unsure of himself. She loves stepping over the line and pushing things to see what will happen; he's more of a law-and-order type, believing in rules and regulations and traditional morality. Adam is quite taken by Evelyn and asks her out. She flirts with him and lets him know that she intends to deface the marble sculpture with spray paint. He leaves before she makes her statement of protest.

Once he begins dating Evelyn, Adam experiences some bold transformations. She tries to build up his self-esteem by complimenting him over the positive changes in his appearance — he loses weight, teases his hair, stops biting his nails, gets contact lenses, and sheds his out-of-style clothes. When they spend an evening out with his former roommate Philip (Frederick Weller) and his fiancee Jenny (Gretchen Mol), the two are stunned by what they see. Adam feels better about himself and is no longer willing to humbly take his friend’s withering criticism of him. However, the real battle of the evening takes place between Evelyn and Philip over the vandalism in the art museum. Meanwhile, Jenny feels very close to Adam and shares his embarrassment at the heated argument going on in front of them.

The Shape of Things is based on Neil LaBute's 2001 play. This always controversial filmmaker likes to make us squirm with his no-holds-barred depictions of sexual politics in our time. In the Company of Men revolves around the misogyny of two twisted white-collar executives while Your Friends and Neighbors probed the various ways men and women use words and sex to hurt each other.

We can't go much further in the plot without giving away the secret animating the relationship between Evelyn and Adam. Suffice it to say that LaBute again has zeroed in on one of the most troubling dimensions of relationships between men and women: the inability of some partners to accept their beloved just as he or she is without trying to change the person. How far are people willing to go in adapting to the transformations desired and orchestrated by their partners?

The crucial gap between Evelyn and Adam is that she sees art as the ultimate liberator whereas he believes that morality must always be the final arbiter. Their first big argument occurs when she is enthralled by a woman's art performance and he finds it appalling because she uses blood from her tampon to paint her father's portrait. He's upset but Evelyn immediately smoothes things over by saying that making up after a fight is what makes them so worthwhile. The Shape of Things is a film hard to shake out of your mind. The questions it raises about love, transformation, art, and morality cut to the quick. 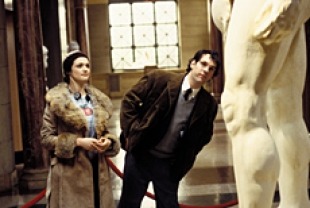