The Man on the Train (L'Homme du train)

Directed by Patrice Leconte
A marvelously acted French film about two men past their prime who cross each other's paths and yearn for something completely different in their lives.

Milan (Johnny Hallyday) arrives in a small French town in November when the hotel is closed and tourists are out of sight and out of mind. He is a grizzled man who looks like he's been through many battles and disappointments and yet weathered them all. He is in this nondescript town to rendezvous with his buddies and rob the bank in three days. Suffering from a headache, he bumps into Manesquier (Jean Rochefort) at a drug store, and this friendly fellow takes him home to his run-down Victorian mansion for a glass of water. It turns out that his host is a retired schoolteacher who lives in the family home, which has gone into disrepair since the death of his mother15 years ago.

From the initial meeting of the two men, it is clear that Manesquier is turned on by the danger and mystery that Milan exudes in his quiet and self-possessed way. After regaling his guest with stories about the paintings on the wall, he offers him a bed for his stay in town. The next day, Manesquier goes through his daily routine of assembling a large puzzle while listening to classical music. He sneaks into Milan's empty room and tries on his leather jacket. In the mirror, he envisions himself as Wyatt Earp, a gunfighter with danger all around him. A friendship slowly unfolds between these two totally different men. Manesquier gives him a pair of slippers, and Milan lets him shoot his gun. They talk about poetry, music, and growing old.

The thief meets with his men, including a new member of the team who speaks only once a day and then he comes out with "Revenge is misfortune's justice." Meanwhile, Manesquier's sister (Edith Scob) comes over to help him pack for a heart by-pass operation that has been scheduled for Saturday, the same day as the planned robbery and Milan's departure. The provincial teacher, who has switched his hair style, laments to his sister that they have never broken the rules or expressed their true feelings in public. In the words of T .S. Eliot, they have measured their lives out in teaspoons.

Earlier in a restaurant where he has eaten every noon for 30 years, Manesquier is stunned when his friend does not respond when a man bangs into him at their table. The gangster explains that he never fights when he's outnumbered; the two men aren't worth the effort. The schoolteacher goes to the bar and orders the loudmouths to be quiet. Much to his surprise, he discovers that one of them was a student of his who still loves poetry thanks to his convincing treatment of the subject. Manesquier returns to the table somewhat disappointed that he wasn't able to get into a fight. He was looking to do something totally different.

The Man on the Train is directed by Patrice Leconte (The Widow of St. Pierre, The Girl on the Bridge) based on a very clever and literate screenplay by Claude Klotz. Whereas the ex-schoolteacher yearns for some adventure and excitement in his predictable life, the loner who has spent far too many evenings adrift in faraway places actually desires the stability, comfort, and tranquility of Manesquier's existence. Their pleasant exchanges over cognac and their chats under the stars on the terrace of the old mansion wear down the edges on the tension that each feels about the fateful Saturday that lies ahead. The reverie between the two men is thrown slightly off balance with the appearance of Viviane (Isabelle Petit-Jacques), the schoolteacher's mistress for the past 15 years. She senses the admiration Manesquier has for the visitor and feels slightly jealous. The dreamlike finale ties together all the pieces of this unusual and marvelously acted French film about the firepower of yearning in the lives of two men past their prime. "It is good not to know all of a poem," the gangster says. And the same can be said about The Man on The Train. 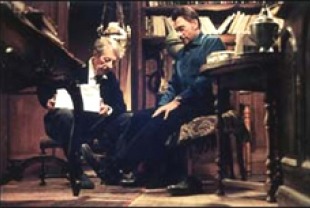