Directed by Sydney Pollack
An ode to individualism with a cowboy who makes a stand against a corporation and a New York reporter who deems her career to be the most important thing in her life.

R. W. B. Lewis has observed: "The American hero is self-reliant and self-propelling, ready to confront whatever awaits him with the aid of his own unique and inherent resources." Robert Garland's screenplay features the archetypal western hero escaping from the decadence of the city to the world of nature. Robert Redford is Sonny Steele, a five-time All-Around World Champion Cowboy who has sold his soul to a giant corporation which uses him as an advertising symbol on their product Ranch Cereal. Already disgusted with what he has become, he is even more aggravated when he learns that the thoroughbred stallion Rising Star, another corporate symbol, has been drugged for his appearance in a number with Las Vegas dancing girls at the corporation's convention. Sonny kidnaps the $12 million animal and heads off into the wilderness with the intention of setting the horse free.

The Electric Horseman, directed by Sydney Pollack, succeeds as an ode to individualism mainly because of Robert Redford's convincing portrait of Sonny. He seems to wear the part as a natural fit. "What 's horse got to do with chorus girls? What's me actin' like an idiot got to do with cereal?" he asks. Of course, it is always pleasurable to see somebody take on a big and ruthless corporation and win.

Jane Fonda is featured as a New York television reporter who tracks Sonny down in the wilderness and is tutored in the ethic of the Wild West. Whereas other romantic comedies of this type would conclude with the couple walking off together into the sunset, this one ends with a finale that will appeal to strong, independent working women. Willie Nelson and Valerie Perrine as Sonny's manager and former wife fill out the cast. 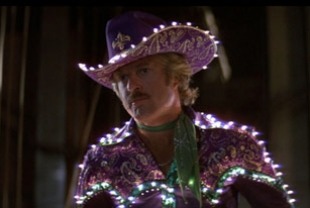 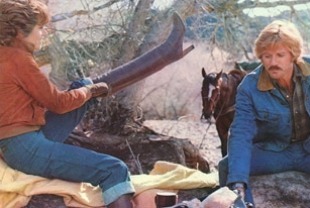