Directed by Andrew Stanton
A rousing computer-animated adventure, now in 3D, that celebrates youthful independence and lances the illusion that parents can make the world safe for their children.

Now in theaters a visually enhanced 3D version of this Pixar classic. It is still a delightful experience the second time around.

Welcome to the fascinating, mysterious, and sometimes frightening underwater world of Nemo (voiced by Alexander Gould), a clown fish who is being raised by his nervous and overprotective father, Marlin (Albert Brooks), in their sea anemone home on the Great Barrier Reef. On his first day of school, his father tells the teacher the boy has a damaged fin and may not swim well enough to go over the big dropoff. Sure enough, while trying to prove his independence to his dad and his courage to his new classmates, Nemo ventures out into unknown territory and is scooped up by a diver.

Marlin, distraught but determined, sets out on a quest to save Nemo. He is befriended by Dory (Ellen DeGeneres), a blue tang who has short-term memory loss. She can never remember Nemo’s name and keeps coming up with new ones. But she does manage to read the address on the diver’s lost mask, and they know they need to swim to Sydney.

One of their most exciting encounters is with Bruce (Barry Humphries), a shark who is part of a 12-step program for recovering fish eaters. His slogan is "Fish are friends, they are not food." But, of course, once he gets a whiff of blood, he falls off the program and reverts to his old ways. All of this tension weighs heavily upon Marlin, who is nervous about everything anyway.

Meanwhile, Nemo has wound up in an aquarium in a dentist’s office overlooking the Sydney harbor. There he is initiated into the group by Gill (Willem Dafoe), a Moorish idol, who dreams of escaping from their confinement in the fish tank. Nemo is intrigued with his new friends, who include Gurgle (Austin Pendleton), a royal gramma who is phobic about germs; Bloat ((Brad Garrett), a blowfish; and Jacques (Joe Ranft), a neatness freak cleaner shrimp. All of them are put on red alert when they learn that Nemo is going to be given to Darla (LuLu Ebeling), the dentist’s nasty niece who enjoys tormenting fish.

This superb family film is written and directed by Andrew Stanton who co-directed A Bug’s Life and is credited as co-screenwriter on all four of Pixar’s previous features. This computer-animated underwater adventure contains a lively mix of interesting characters and three protagonists whose personalities make them both appealing and sympathetic.

Especially effective is the film’s exploration of the illusion that parents can make the world safe for their children. In her memoir A New Set of Eyes: Encountering the Hidden God, Paula D'Arcy writes about an insight she gained from a young woman in Haiti: "When I hugged Sheraz goodbye, whispering 'Be safe,' into her ear, she stood back and looked straight into my eyes with her dark beauty. 'Safe,' she repeated. 'It used to be my prayer. But now I recognize that we may not be safe. And if this our portion, so be it.' No sentimentality. No smallness. Only clarity. Power, Freedom. We make a difficult demand on life . . . that it be safe and secure." Finding Nemo teaches the important lesson that we cannot avoid danger. Sometimes only by taking risks and facing our adversities do we discover who we really are.

Marlin’s refusal to let his son find his own way in the dangerous world backfires on him at the outset. But on his perilous journey to find Nemo, this very unfunny clown fish (whenever he tries to tell a joke, it falls flat) comes to see that obstacles and dangers help build character and alter bad habits. Under the influence of his ditsy friend Dora, he loosens up a bit. His best spiritual teacher turns out to be a laid-back and unflappable sea turtle named Crush (Andrew Stanton), who gives his children the freedom to test themselves against trouble and learn from their mistakes. In the end, Marlin lets go of the illusion of safety and opens up to the delights of letting Nemo explore all the wild possibilities.

One of the other marvels of this wonderful family film is its depiction of cross-species cooperation. Tip your hat to Nigel (Geoffrey Rush), a resourceful pelican who helps Nemo and his father when they need it most. We also laughed out loud over the gulls and their insistent claims of “mine.” 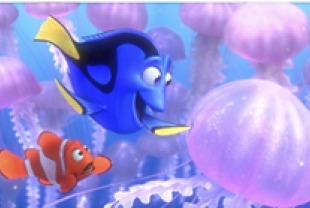 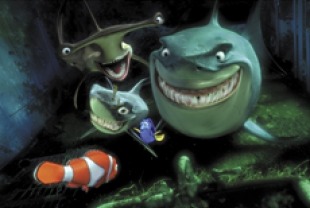 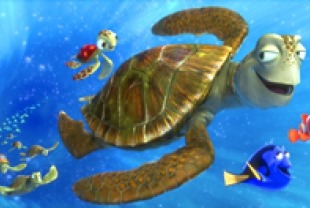