The Whales of August

Directed by Lindsay Anderson
A deeply moving drama about two elderly sisters who discover that it's never too late to change.

The Whales of August is set in a cottage on a Maine island where two sisters have spent 60 summers. Now they are both widows: Sarah (Lillian Gish) is a romantic who loves roses, little projects,and talking with people. Her sister Libby (Bette Davis) is blind and bitter; she's a difficult woman who always seems to dwell on the negative.

Bernice Neugarten, an expert on adult development, has observed: "The stereotype has it that as people age, they become more like one another. In truth, they become less and less alike. The longer people live, the greater the differences between them." That is certainly true in this drama in which we also meet Tisha (Ann Southern), a lonely woman who hides her malaise behind a stream of gossip; Mr. Maranov (Vincent Price), an elderly Russian emigre who has never found a place to call home; and Joshua (Harry Carey, Jr, ), a handyman who has made puttering around into an art form.

Director Lindsay Anderson draws wonderful, poignant and endearing performances out of this gifted cast. In a most remarkable way, he lets small gestures and details speak volumes about aging, siblings, change and memory. In two of the most emotionally affecting scenes of the film, Libby sits alone in her room caressing her face with a lock of her departed husband's hair, and later in the dining room Sarah celebrates her wedding anniversary in a soliatry ceremony.

Obie Award-winning playwright David Berry, who has adapted this 1981 play for the screen, makes it quite clear that it is never too late in life to resolve differences with those you love or to open a window to new attitudes and possibilities. 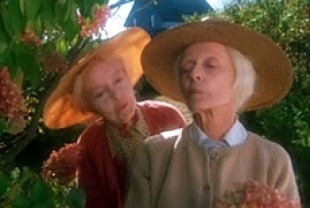