Directed by Gregory Nava
Charts the harsh odyssey of two Guatemalan Indians as they struggle to make a new life for themselves in America as illegal immigrants.

Immigration has become one of the most heated issues of our times. The subject is rife with emotion, conflicting values, and cold economic realities. El Norte, a politically charged Mexican film, addresses this issue by speaking to the heart rather than to the head. Through the odyssey of two Guatemalan Indians, we experience the courage and fortitude necessary for individuals to make a new life for themselves in America.

Enrique (David Villalpando) and his sister Rosa (Zide Silvia Gutierrez) leave the poverty and violence of their village behind and journey north to the United States. In Tijuana, they have trouble finding a "coyote" to help them across the border. After several mishaps, they are led to an abandoned sewer line, and crawling on their hands and knees cross to San Diego.

Enrique and Rosa settle down in the "promised land," which turns out to be a sleazy place run by Monty Bravo (Trinidad Silva), a Mexican-American entrepreneur. They do at least have a flush toilet and electricity. Propelled by an ardent belief in themselves and a willingness to learn, they both land respectable jobs. He becomes a busboy in a posh restaurant, and she works as a maid in Beverly Hills. In their free time, they both try to learn English.

Director Gregory Nava convincingly dramatizes the culture shock of these two humble Indians and their struggle against all odds to succeed. However, Enrique is reported to the immigration authorities by a co-worker who resents his swift rise to waiter, and Rosa is felled by infections resulting from the rat bites she received in the sewer.

Nava's attention to details, particularly the aesthetic and religious beauty of Indian culture, and his sympathy for the protagonists' inner lives lift this story above its melodramatic moments and make the tale a memorable one. 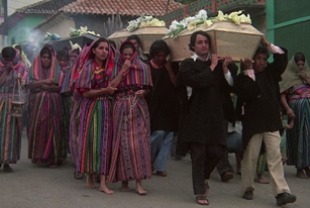