Directed by Christopher Cain
An extraordinary film with its focus on grief, guilt, and the lamentable dynamics of a family unable to handle or cope with tragedy.

We live in a shadowy world where life and death are at stake in bromidic events. On occasion, individuals are overwhelmed by a guilt or grief or despair so deep they cannot throw it aside themselves. When friends and family are of no help, we turn to strangers for mercy and understanding. Every once in a while, they, through the grace of God, can speak the words we need to hear — words of kindness or absolution which give us back our lives again.

The Stone Boy is an intense, sad and well-acted movie which slowly and inexorably moves toward one such beautiful and cathartic moment of grace. Based on a short story by Gina Berriault, it is set on a Montana farm where Joe Hillerman (Robert Duvall) lives with his wife Ruth (Glenn Close) and their three children.

Twelve-year-old Arnold (Jason Presson) accidentally kills his older brother Eugene (Dean Cain) when his rifle goes off as he crawls through a fence on an early morning duck hunt. Stunned, the boy delays telling his family. When he finally does, they recoil from him in shock.

After a brief police investigation and the funeral, a deadly silence settles over the Hillerman clan. Joe bottles up his feelings and advises Ruth to let Arnold work out his grief on his own. Nora (Susan Blockstone), the sister, finds it difficult to contain her anger. Grandfather George (Wilford Brimley) is the only one who understands Arnold's psychological confusion.

The boy's Uncle Andy (Frederic Forrest) observes, "Days are years when it comes to sorrow — there's no such thing as time." Despite this bit of rural wisdom, he seduces Eugene's distraught girlfriend (Cindy Fisher). His long-suffering wife Lu (Gail Youngs) who is fed up with his womanizing, becomes hysterical and blames Arnold for everything. After the miscarriage of another child, she leaves for Reno to start a life of her own.

The Stone Boy is an affecting portrait of a family unhinged by grief. No one except grandfather George seems capable of verbalizing the pain they all feel. Isolated and overburdened with guilt, Arnold flees the farm and his grandfather's care to visit Aunt Lu in Reno. She accepts his apology for the trouble she accused him of causing but is incapable of giving the boy anything more. Only a young mother with a baby on a bus provides Arnold with the love and absolution he has yearned for so desperately.

Loss is an integral part of the human experience with profound consequences from birth to death. The Stone Boy follows in the spirit of Ordinary People with its focus on guilt, grief, and the lamentable dynamics of a wounded family unable to handle or cope with tragedy. 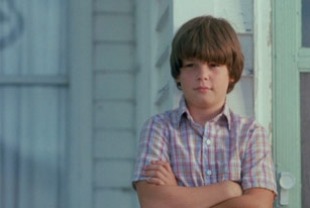