Directed by Hany ABu-Assad
A poignant and touching Palestinian film about love as the only valid antidote to fear in an environment of anger, hatred, violence, and death.

Rana (Clara Khoury) is a seventeen-year old Muslim who lives with her wealthy father in East Jerusalem. He wants her to marry and has given her a list of eligible men including a lawyer, an engineer, and a doctor. If she doesn’t choose one of them before the plane leaves at four o’clock, she must accompany her father to Egypt where she can continue her studies. Rana is a free-thinking young woman with a stubborn streak: she wants to find her lover, Khalil (Khalifa Natour), a theatre director, before the deadline and marry him.

From the moment she rises in the morning and realizes her mission, Rana is consumed by fear. Will she be able to find Khalil and make all the necessary arrangements in ten hours? Will her father agree to the wedding or will there be a terrible rift between them? Another kind of fear also clutches at her throat and will not let go. The streets of Jerusalem are not a safe place for a Muslim woman given the hatred and the continuing bloodshed between the Israelis and the Palestinians. Just how scary this can be is illustrated vividly when some soldiers taking a break jump up and point their rifles at Rana after she screams at her cell phone and threatens to throw it to the ground after several unsuccessful attempts to reach Khalil. When she finds out that he is sleeping in a theatre in Ramallah, she decides to go there. On the way she has to pass through a military roadblock that separates Jerusalem from the West Bank. Rana witnesses some Palestinian children throwing rocks at Israeli soldiers. One of the boys is shot in the leg. In a fit of rage. she lobs a rock at the soldiers and runs away.

When Rana finally reaches the theatre in Ramallah, she wakes up Khalil with the news that he must marry her before four o’clock. He agrees, and his actor friends clap their hands in celebration. Ramzy (Ismael Dabbag) volunteers to help them find the registrar who is needed for the wedding ceremony. In a race against time, these three must battle roadblocks and lines to get the paperwork for the wedding and then obtain Rana's father’s permission since she is underage. Again and again, Rana has to fight all the fears that are swirling around her like buzzards. Several times she loses it — once while seeing the loss and the anger in the eyes of mourners at the funeral of a young man and again when she desperately tries to push her way through a roadblock. Khalil shows his disdain for the surveillance cameras by doing a somewhat audacious theatrical act in front of one of them.

Rana’s Wedding is a powerful Palestinian film directed by Hany Abu-Assad that posits love as the only valid antidote to fear in a tense environment of anger, rage, death, destruction. The closing scenes beautifully reveal how a slender thread of hope can be nourished in the hearts of those who participate in the universal rituals that affirm life, renewal, and meaning. 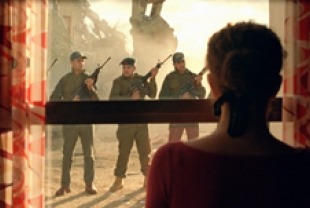