Directed by Sofia Coppola
A luscious and sensitive film about two Americans who reach out over the age barrier to connect with each other in Tokyo.

Bob Harris (Bill Murray), a famous American movie star whose career is on a bit of a decline, is in Tokyo to shoot a whiskey commercial. His wife of 25 years is back home with the children. Staying in the same luxury hotel is Charlotte (Scarlett Johansson), a recent Yale graduate and philosophy major who has accompanied her husband, John (Giovanni Ribisi), a photographer, to Japan. While he works, she has plenty of time to think about the state of their two-year-old marriage and her frustration about not knowing what she really wants to do with her life. She's tried writing and photography and come up feeling inadequate in both. While visiting a Buddhist temple, she breaks down. Back at the hotel, she calls her mother, who doesn't hear the dread in her daughter's voice or see the tears running down her face when she says everything is fine in Tokyo. Of course, it doesn't help that Charlotte hasn't been able to sleep since arriving in the city.

Bob Harris feels curiously adrift on this visit to Tokyo. In the taxi on the way to the hotel, he spots a billboard with his image on it from an earlier whisky ad campaign. On an elevator, towering over the Japanese passengers, Bob spots Charlotte and they exchange smiles but no words. Later, they cross paths in the hotel bar. But Bob is caught up in a middle-age malaise in which he feels disconnected from everything and everyone around him. Perfunctory calls to his wife about some renovations in the home are mildly irritating. A call girl sent to his room tries to seduce Bob but he can't understand what she is saying (an order to rip her stockings is heard as "lick my stocking") and asks her to leave. On television, one of his old movies, dubbed into Japanese, proves to be whimsical. During the ad shoot, he wonders why a long instruction by the Japanese director ends up so short when it is translated for him.

Lost in Translation is written, directed, and produced by Sofia Coppola. Her first directorial effort, The Virgin Suicides, was a magical movie with compelling characters and a dreamlike quality. With this enchanting film she confirms the impression that she is a masterful mood maker. The theme here is the yearning we all have to connect with a kindred spirit, especially when we are overtaken by moods that leave us immobilized.

Bob and Charlotte eventually speak to each other and realize they both share an inability to sleep. When John leaves town for several days on a shoot, Charlotte invites her new friend to join her and some Japanese acquaintances on a night out. Watching Bob do his rendition of Brian Ferry's "More Than This" in a karaoke joint, Charlotte sees an adventuresome side of him that is very appealing. She also is quite taken with his nurturing side that emerges when he takes her to a hospital to have her stubbed toe checked out.

At one point, she asks him: "I'm stuck. Does it get easier?" He responds, "Yes, it gets easier" and then adds, "The more you know what you want, the less things upset you." Bob has no idea how Buddhist he really is. Charlotte takes a train to Kyoto by herself and is awed by the beauty of the place. Back at the hotel she wanders into a class on flower arrangement and tentatively joins in. There are many little moments in this film that ring true like this.

Some movies are so sense luscious that you can't get them out of your consciousness for weeks. They linger there and plant new seeds of appreciation. Lost in Translation is such a film. Cinematographer Lance Acord does a wonderful job capturing the multidimensional mysteries and marvels of Tokyo. This glittering city of skyscrapers becomes a major character in the drama. Bob and Charlotte spend a lot of time looking at the view from the windows of their hotel rooms 40 stories up. When they venture out on the streets, we are treated to visual adventures in restaurants, nightclubs, a strip joint, a Buddhist temple, and a video arcade. Even though the characters never really get plugged into the city, thanks to the barriers of language and custom, they do manage to connect with each other in a soulful way that refreshes and renews them both. 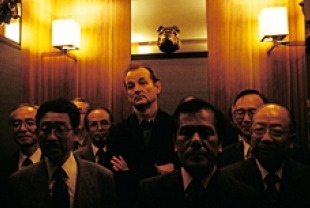 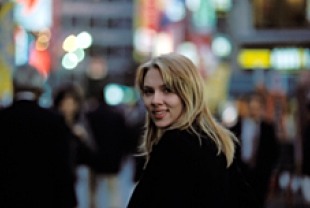