Directed by Jonathan Lynn
An entertaining comedy carried by its rousing Gospel choir numbers about the internal makeover of a selfish liar who finds community just when he needs it most.

Darrin (Cuba Gooding, Jr.) is a successful Manhattan ad executive who has a way with words and a penchant for deception that he picked up on the road during travels with his mother (Faith Evans), a R&B singer. His swift rise in the corporate world comes to a quick end when some of his fabrications are exposed. To make things worse, Darrin has accumulated substantial credit card debt. Before he knows what is happening, Darrin finds himself high and dry in the Big Apple with no one to turn to for help.

Then he is summoned back to Monte Carlo, Georgia, for the funeral of his Aunt Sally, a strong supporter of his mother even after she was kicked out of the choir of the Beulah Baptist Church for her secular singing. Darrin is stunned to learn that Sally has left him $150,000 if he assumes her role as director of that same church's choir and takes them to the regional Gospel Explosion competition. The Rev. Lewis (Wendell Price) has no problems with this arrangement since he needs the $10,000 in prize money for the winning choir to fix up the church.

The minister's sister Paulina (LaTanya Richardson), however, is dead set against Darrin who has no experience in leading choirs and is obviously a sinner whose only interest in life is money and success. But the momentum swings to his side when he tells them he is a record producer and knows just what it will take to win the competition. Soon Darrin is holding auditions in the community and finding out that there isn't much singing talent to be found. The most gifted of all is Lilly (Beyonce Knowles), a single mother and performer at a local club. It turns out that she had a crush on him when he was a little boy. Darrin applies all the charm he can muster to get her to join the choir. Meanwhile, he relies on the vocal talents of some barbers (the O'Jays who showcase their skills in a lively rendition of "Loves Me Like a Rock") and two prison inmates — one a falsetto singer (Montell Jordan) and the other a rapper (T-Bone).

Fans of gospel and R&B music will enjoy the exuberant choir numbers especially those performed at Aunt Sally's funeral. Jonathan Lynn (Cousin Vinny) directs this comedy that predictably depicts Darrin's internal make-over from a greedy liar into a dedicated and soulful person. As anyone who has ever sung in a church choir knows, this small and intimate community can work wonders on individuals who have not yet realized the joy of singing with others in harmony. 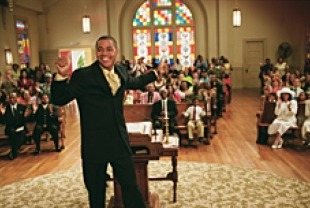 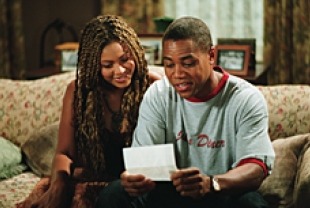