Tibet: Cry of the Snow Lion

Directed by Tom Peosay
An extraordinary and passionate documentary about the plight of the Tibetan people whose religion remains one of the wonders of the world with its wisdom on nonviolence, mind training, and compassion.

Tibet: Cry of the Snow Lion is an extraordinary documentary about the near-destruction of an enlightened 1,700 year old culture, the incredible suffering of a violated people, and the spiritual survival of hope in the hearts of those who believe that one day they will be able to re- taste the joys of freedom. Director and cinematographer Tom Peosay spent ten years on this vast and substantive project shot on "the rooftop of the world." Interviews provide both historical and contemporary perspectives on the situation in Tibet, including commentaries by His Holiness the Dalai Lama; Lhasang Tserling, founder of the Amnye Machen Institute for Higher Tibetan Studies; Robert Thurman, Director of Tibet House in New York City; John Avedon, author of In Exile from the Land of Snows; Stephen Batchelor, Buddhist scholar and author; Robert Ford, author of Wind Between the Worlds and one of the few westerners to have lived in pre-Chinese Tibet; Blake Kerr, author of Sky Burial: An Eyewitness Account of China's Brutal Crackdown in Tibet; Drew Liu, Executive Director of the China Strategic Institute in Washington, D.C; and many others.

Some remarkable scenes draw out our compassion for the Tibetan people and their ongoing ordeals under Chinese Communist oppression since the so-called "peaceful liberation" of the country in 1949. Pre-occupation Tibet was a Buddhist theocracy, a country that invested 85% of its national budget to support monastic universities where monks and nuns studied the nature of the mind. That would be the equivalent, notes Robert Thurman, of the entire U.S. defense budget going into education so as to produce "enlightened people." Because the monasteries also controlled the land, when the Chinese invaded, the religious establishment was targeted for destruction. The opening sequence uses rare archival and undercover footage to cover the Lhasa demonstrations of 1987 during which the monk Jampa Tenzinm was severely burned while rescuing some of his peers from a burning police station where they were being detained. He was hailed as a hero for his courage and witness at the time, but he was eventually arrested by the Chinese, tortured, and killed.

Then there is the little known story of the CIA's support of the Tibetan resistance movement, which is told by activists who were trained by in the United States but later were abandoned when the world's democratic leader set up trade relations with China and downplayed human rights violations in both Tibet and China. Once again economic priorities defined American interest.

Two survivors of years of imprisonment and torture by the Chinese share their stories. One is Ani Pachen, the daughter of a chieftan in eastern Tibet who recalls fondly her childhood in pre-occupation Tibet. She took vows as a nun but after her father's death led his forces against the Chinese. She spent 21 years in prison and was only one of four survivors of 100 women in her prison. She shows a quilt she has stitched together out of pieces of their clothing. Equally mesmerizing is the account of Palden Gyatso, a monk who was captured in a crackdown after the Dalai Lama escaped; he spent 33 years in a series of prisons, labor camps, and various forms of house arrest. After enduring years of brutal torture, including the use electric cattle prods in his mouth, this monk fled to India. He has testified before the U.S. Congress and the U.N. Commission on Human Rights. Still, to date, the United Nations has done nothing to challenge China's illegal and immoral occupation of Tibet.

Of course, the Dalai Lama remains the most persuasive spokesperson for the plight of his people. Again and again, he emphasizes that he holds no hatred in his heart for the Chinese oppressors, and in fact, sees them as teachers who spur him to the spiritual practice of compassion. The Dalai Lama's "Five Point Peace Plan" has been well received by devotees of nonviolence. Tibet is strategically located between the two most populous countries in the world, China and India, so his proposal that the area become a demilitarized "Zone of Peace" seems both creative and sound. But although the Chinese have rebuilt several monasteries — after destroying 1,600 of them — they are still trying to obliterate any memory of the Dalai Lama: it is a major offense in Tibet today to possess a picture of him. And as a Chinese government spokesperson at the Washington, D.C., Embassy of the People's Republic of China puts it: "It is totally unacceptable to the Chinese government for officials of any country to meet him in any form."

China's latest method of stamping out Tibetan religion and culture is the construction of a railroad that will accelerate populating the area with ethnic Chinese. The documentary reveals how these new immigrants have already changed the face of Lhasa with large apartment complexes, brothels, and Western chain stores. The Chinese policy of colonization and assimilation looks very similar to what officials and politicians did to the Native Americans in the United States and the aboriginals in Australia. As this documentary points out, many Tibetans now live in poverty and are unemployed. With their religion and culture under attack, they have little to cling to except hope that one day they will be free to determine their own future.

We were moved, shocked, appalled, and emboldened by Tibet: Cry of the Snow Lion. The tradition of nonviolence, optimism, mind training, and compassion that has been nurtured in Tibetan monasteries for centuries is one of the great religious legacies to the world where violence, nationalism, political oppression, human rights violations, and corporate greed hold sway. The bodhissatva spirit incarnated by the Dalai Lama and so many Tibetan monks is a path that can end the suffering of human beings and quash the fires of hatred. Robert Thurman has called the Tibetan Buddhists "the supreme artists of life," and they are spreading their dharma all over the face of the earth.

This documentary written by Sue Peosay and Victoria Mudd, narrated by Martin Sheen, and produced by Tom Peosay and Sue Peosay of Zambuling Pictures and Maria Florio and Victoria Mudd of Earthworks Films. Florio and Mudd won the Best Documentary Feature Academy Award in 1986 for their film Broken Rainbow, which exposed the shameful forced relocation of Navajo Indians off their land in the 1970s. They hope that, just as their previous film raised the awareness and compassion of Americans toward the plight of the Native Americans, this film will raise the concerns of Chinese about the actions of their government.

This film is bound to stir your conscience, appeal to your yearning for justice, and inspire you to do all you can to advance the cause of the Tibetan people. 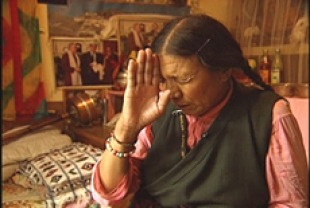 Blessings on the Wind

The Tibetan Book of the Dead

The Yogis of Tibet