Directed by Tom McCarthy
A fine and funny film that explores all the curious ways in which friendship can abound, express love, turn us around and take us to places we have never imagined.

In his book Here and Now, Henri J. M. Nouwen writes: "The spiritual life is one of constant choices. One of the most important choices is the choice of the people with whom we develop close intimate relationships. We have only a limited amount of time in our lives. With whom do we spend it and how? That's probably one of the most decisive questions of our lives. It is not without reason that parents are very concerned about who their children bring home as playmates, friends or lovers. They know that much of their children's happiness will depend on those they choose to be close to."

Movies about the choices of friendship are few and far between, a breed apart from action dramas, romantic comedies, horror stories, or murder mysteries. They usually depend on little details that open up new vistas of possibilities in the characters. We laugh and we cry as friends listen deeply to each other or share magic moments that sprout up when they least expect it. Not very much happens, and yet we know that inner changes are taking place. Connection gives meaning to life and banishes dread, fear, and loneliness for a while.

The Station Manager is one of the best movies about friendship we can remember. Spend some time with the three main characters in this drama and you'll find out a lot about trains, grief, solitude, silence, play, and the mysteries that make human intimacy so endearing and so magnificent.

Fin McBride (Peter Dinklage) is a dwarf who works in a model train store and just loves his job. When his boss dies and leaves him an abandoned train depot in Newfoundland, New Jersey, he is a bit mystified. But he packs up his meager belongings and sets out for this remote country place where he can at least be left alone. He's had his fill of being ridiculed and treated like a freak.

Arriving at his dusty inheritance, Fin surveys the scene. It's right next to the still-active railroad tracks. There is a couch to sleep on, no phone, and the water and electricity need to be connected. It will do. But the first morning, he is awakened by Joe (Bobby Cannavale), a sociable young man whose hot-dog truck is parked right next to the depot. Joe is a regular motor-mouth while Fin, on the other hand, is a man of few words. Joe keeps hounding him until they begin to get to know each other. Another visitor is Olivia (Patricia Clarkson), a distracted artist who nearly ran over him twice in the same day. She stops by the depot with a bottle of booze to apologize for her reckless driving.

Fin tries desperately to avoid these new acquaintances by taking long walks on the railroad right-of-way and checking the timing of the trains at a bridge. But they manage to wear him down and open him up a little bit more each time they get together. They learn to respect his need for solitude, and he comes to see that they bear their own burdens of grief and pain. Fin also gets to know the local librarian (Michelle Williams), who takes a shine to him, and an African-American grade school girl (Raven Goodwin), who convinces him to talk at her school about his passion for trains.

The Station Agent marks the debut of writer and director Tom McCarthy who has quite a knack for making the foibles and eccentricities of these three characters endearing. Fin is a very slow and centered young man who has a subtle impact on the jazzed up Cuban Joe and the frazzled and burnt-out Olivia. They, in turn, draw him out of his isolation and help him see that he has many fine gifts to share with others.

At one point, Bobby asks Olivia, "What do you do for fun?" and she responds, "I don't." Eventually, these three cook up some very fine and fun times with each other that draw out the playful selves they have hidden for far too long. The performances by Peter Dinklage, Bobby Cannavale, and Patricia Clarkson are delightfully entertaining. Here is a film that dares to explore all the curious ways in which friendship can abound, express love, turn us around, and take us to places we never imagined.

DVD features include a commentary with director Thomas McCarthy, as well as deleted scenes 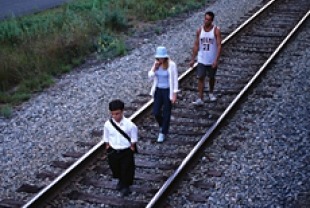