Directed by Lars von Trier
An innovatively staged and brilliantly acted parable about a fear-based community in the 1930s whose greed, hatred, small-mindedness, and entitlement come to the fore in their reactions to a stranger.

The always controversial Lars von Trier has returned to the intensity and laser-like moral focus of Breaking the Waves with this innovatively staged and brilliantly acted parable about a fear-based community in the 1930s whose greed, hatred, small-mindedness, and entitlement come to the fore in their reactions to a stranger. Many will see this intricately staged drama as a cryptic reworking of Thornton Wilder's Our Town with its focus on the smallest details of daily life among people who are working out their destinies by the choices they make. Others have already criticized it as an excessively harsh polemic against American power, arrogance, and imperialism on the world stage. And, of course, some critics will always put down a film that ambitiously attempts to comment on the shadow elements of human nature in community and takes nearly three hours to do so.

We have chosen to emphasize the film's handling of the important subject of hospitality. What happens when others present themselves as a gift? What limits are put on human kindness when fear and paranoia take over? Hospitality and hostility are derived from the same root. Whereas the former is about welcoming all, the latter thrives on insider- outsider and them-against-us conflicts.

The time is the Depression, and the setting for this drama is a town in the Rocky Mountains named Dogville that consists of a dead end road, an abandoned silver mine, and a street called Elm Street though it never had any of these trees providing shade and comfort to its citizens. The film contains nine chapters and a prologue, 19th century literary-type narration by John Hurt, and baroque music that lends solemnity to the stylized movements on the stage which consists of spare outlines on the floor for streets, homes, and other structures in the community.

The action begins with Tom Edison (Paul Bettany), the town's self-appointed philosopher and moralist, hearing gunshots from the valley below and then the sound of a dog barking. The cause of this commotion is Grace (Nicole Kidman), a lady who is being pursued by gangsters. Just before they arrive in town, Tom offers her sanctuary in the mine. The head gangster gives him a card with his telephone number and promises a large reward for her return to him. Then the gangsters leave Dogville.

Tom assures the beautiful fugitive that the townsfolk are good and honest people and that, if she chooses to stay, she will be treated well. Eager to put into motion an experiment that has long interested him, Tom convinces his fellow citizens to give her a two-week trial period and if they don't like having her around, she will be ordered to leave. The philosopher wonders how people will respond to someone who is a gift. Will this stranger be accepted as one of their own? Tom tells her that she should offer to help out but, after she visits all of the homes, everyone nervously rejects the suggestion.

A small breakthrough happens when Ma Ginger (Lauren Bacall) lets Grace assist her in tending the wild gooseberry bushes behind her general store. The fugitive proves herself to be a hard worker and suddenly others find things she can do for them. Grace patiently chats with Jack (Ben Gazarra), a lonely blind man; turns the pages for the organist who is always practicing; tries to cheer up Tom's father (Philip Baker Hall), a retired doctor; takes care of a crippled young girl; and babysits for the children of Vera (Patricia Clarkson) and her surly apple grower husband Chuck (Stellan Skarsgard). Grace is befriended by Liz Henson (Chloe Sevigny), who is relieved to have all the sexual attention of the town's men folk focused on this attractive stranger. Her old beau Tom turns his affections to Grace and feels very happy when the citizens of Dogville vote to keep her in their community.

But something imperceptibly shifts in people's attitudes and the toxins of fear and paranoia raise their hideous heads after a new "Wanted" poster is put up by police from another town. Could Grace be a bank robber? Who is she really? Although Tom and others realize that this is probably just a ploy by the gangsters to get Grace back, the narrator informs us that Dogville has begun to bare its teeth. The fugitive suddenly finds herself the object of scorn, anger, and sexual abuse. Jack's hand moves from her knee to her thigh, Chuck rapes her in his home, and his son Jason demands that she take him on her lap and spank him hard. Not even the china figurines which Grace has purchased from Ma Ginger's store can console her. Vera's ire is raised when she finds out about Jason and Chuck. Her act of revenge cuts Grace to the quick.

Lars von Trier has made a mesmerizing and compelling film about the ways in which community can fester and turn bad when fear of the unknown and the unfamiliar brings out the worst in people. Spiritual writer David Spangler has written: "Some people think they are in community, but they are only in proximity. True community requires commitment and openness. It is a willingness to extend oneself to encounter and know the other." Tom's noble experiment goes wrong when the townsfolk turn against Grace, trample on her rights, violate her body, and try to steal her soul by humiliating her so completely that she no longer feels human. One of them even remarks: "Don't think of this as punishment" when a dog's collar is put around her neck and she is forced to drag an old flywheel behind her on a chain. Another says, "It's nothing personal." And we recall the communities that participated in the persecution of the witches in New England, the decimation of the Native Americans, the enslavement of African-Americans, and the shabby treatment of immigrants who were made to feel like pariahs, something that continues to this day. In the surprising finale to Dogville, Grace demonstrates another shadow side of America that is as chilling and true as everything that has preceded it.

The DVD features two commentary tracks, one with director Lars von Tier, and the other with cinematographer Anthony Dad Mantle. 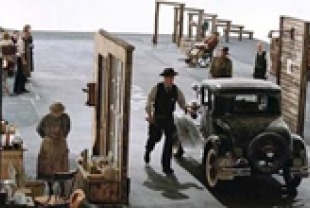 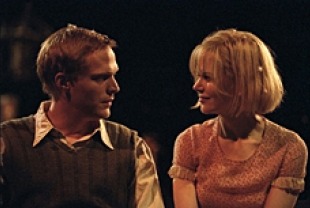