Directed by Joel Coen
A clever look at the follies and the grief caused by all those who try to milk the institution of marriage for all they can get out of it.

Miles Massey (George Clooney) is a Los Angeles divorce attorney who is at the peak of his career with one courtroom triumph after another and more perks and toys than his competitors. He is especially proud of his newly capped teeth. He shows them off to his new client Bonnie Donaly (Stacey Travis) who is taking her TV producer husband (Geoffrey Rush) to the cleaners even though he found her playing around with the pool cleaner (Jack Kyle) in their own home. Miles is so clever that he can win the war no matter what the situation. No wonder he is always a featured speaker at the matrimonial lawyer's association meetings. His famous "Massey pre-nup," an agreement protecting the financial assets of the marriage partners, has never been broken.

But this slick top dog is feeling a tad bored with all of his success. He complains to his loyal associate (Paul Adelstein) that the best thing that could happen to him would be a new and daunting challenge. And then Miles meets Marylin (Catherine Zeta-Jones), a glamorous woman whose private detective (Cedric the Entertainer) has taken a video of her very wealthy husband (Edward Hermann) in a motel room making whoopee with a young woman. But in court Miles presents with some surprising evidence that proves she is a gold digger, thus winning the case for his client.

Marylin knows that she exerts a strange power over Miles, and she makes the most of it in a series of startling events and turn-arounds involving an oil tycoon (Billy Bob Thornton), some hot-and-heavy moments with Miles in Las Vegas where he is giving a keynote speech to divorce lawyers, and the death of her first husband. Marylin is a true believer in the American dream that wealth will bring freedom and independence. Even so, she's appalled at a friend who lives alone in a thirty-seven room mansion with only her ulcer to keep her company.

Joel Coen directs this hilarious comedy that offers a clever look at the follies and the grief that come to all those who try to milk the institution of marriage for all they can get out of it. George Clooney puts in another top-notch comic performance as the slick but vulnerable Miles, a man who follows his heart and finds his life turned around. He even tries to talk his colleagues into being advocates for love. Ethan and Joel Coen have a lot of fun in this romantic comedy with two Rottweiler dogs, an inhaler and a gun, a detective who prides himself on catching adulterers, and some Simon and Garfunkel tunes. 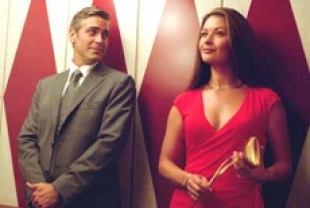