Directed by Denys Arcand
A bracing comedy about all those bothersome outside forces that unsettle our lives along with all those blessings that open our hearts unexpectedly.

The always provocative Canadian filmmaker Denys Arcand (Jesus of Montreal, Stardom) has come up with another thought-provoking film that covers a smorgasbord of complex topics, including death, family ties, sexual politics, the Catholic Church, Canada's health care system, drugs, labor unions, law and order, and global politics. The capacious term in the title refers to all the outside forces in our lives that leave us feeling exhausted and powerless.

The chief barbarian invader for Remy (Remy Girard) is the terminal illness that has taken over his body. Last seen in The Decline of the American Empire, this history professor cheated on his wife six months after they were married and loves his role as an unrepentant libertine. His ex-wife (Dorothee Berryman) contacts their son, Sebastien (Stephane Rousseau), a highly successful financial manager in London, and he flies to Montreal with his fiancée (Marina Hands). He knows his father thinks he is a barbarian who has no appreciation of books and only plays video games, but he is determined nonetheless to take charge of looking after him.

The problem is the chaotic hospital where the doctors are so busy and hard-pressed that they cannot even remember the names of the patients. Angered that Remy has to share a room with others, Sebastien uses his money to orchestrate a change of rooms to a vacant floor. It is interesting to watch him deal with a union representative who squeezes everything he can out of him. Following the suggestion of a doctor friend, Sebastien also decides to find his father a guardian angel who can administer heroin as a potent pain-killer. For this mission, he hires Nathalie (Marie-Josee Croze), the junkie daughter of one of Remy's old lovers, Diane (Louise Portal). Although she warns him never to trust a junkie, he is willing to put his confidence in her that she will be there for his father.

Remy finds an unexpected ally during his hospital stay in Sister Constance (Johanne Marie Tremblay), a nun who listens to his rants against the Catholic Church and, just before he is to be moved to a cottage by a lake, tells him to "embrace the mystery." She also wisely counsels Sebastian to tell his father that he loves him and to be expressive of his emotions through touch.

Sebastien contacts all of his father's friends, and they arrive at the lake to cheer him up. These characters, who also appeared in The Decline of the American Empire, are Pierre (Pierre Curzi), a middle-aged man now saddled with a young wife and child; Claude (Yves Jacques), a witty fellow who has brought his lover Alesandro (Toni Cecchinato); Dominique (Dominique Michel), one of Remy's former mistresses, and the Diane. All intellectuals, they fondly recall the past and their sexual adventures and forays into radical politics. In one of the most clever sequences in this frequently humorous drama, Remy recounts how various films colored his relationships with women. There are also several flip asides about the looming presence of America in Canadian consciousness. Sebastien wins Remy's heart by delivering several video messages from his sister who is away on a long voyage at sea; she states her appreciation of her father's legacy to her — a lust for life.

Writer and director Denys Arcand would agree with Anne Bedford Ulanov who has written: "Meaning does not come to us in finished form, ready-made; it must be found, created, received, and constructed. We grow our way toward it." The Barbarian Invasions works well in its depiction of a father-son reunion that opens up these men and softens their hearts in the face of death. In the end, Remy rejoices in his life of wine, women, books, friends, and music, and is able to add to these blessings the gift of a son who truly nurtures him in the last stage of his journey. 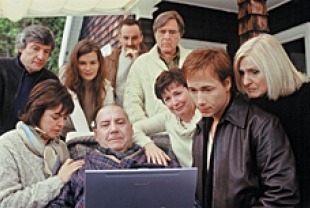 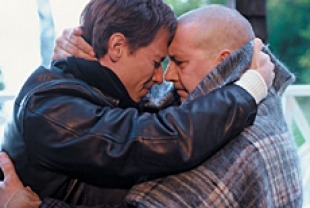