Directed by Rebecca Cammisa, Rob Fruchtman
A compassionate story of a tough Catholic nun working with addicts in the South Bronx who has let their suffering touch her heart.

Sister Helen Travis (1930-2000) was a recovering alcoholic and Benedictine sister who spent the last years of her life running a 23-bed halfway house in the rough-and-tumble slum of the South Bronx. She embarked upon this rugged and dangerous ministry in response to the murder of her 15-year-old son, the loss of her husband to alcoholism, and the death of her other son from drugs. This incredible documentary is a stirring tribute to Sister Helen who believed that God puts you where He wants you. Two-time Emmy Award-winner Rob Fruchtman and veteran photographer and filmmaker Rebecca Cammisa moved in with this nun and shot over an 18-month period. They have captured the life and work of a feisty, oddball, and compassionate servant of God who tried to give others a second chance at life.

The South Bronx is New York City's most economically depressed area and drug use is four times higher there than in the rest of the nation. Sister Helen's shelter provides recovering addicts and alcoholics with a private room in a structured and supportive environment. In return, the residents must stay clean and sober, follow a strict curfew, attend regular meetings, do community service, and obey her orders. In various scenes, Sister Helen asserts her will in a unique brand of tough love. Like her favorite singer Frank Sinatra, she insists that everything be done "her way."

Despite the unpopularity of surprise urine tests, they are a regular thing at the halfway house. Many men are turned away after short interviews with Sister Helen. She simply will not abide liars or anyone looking for a free ride. Yet she demonstrates a soft spot in her heart for Asish, an Indian alcoholic who relapses again and again. Robert, an Italian-American who is a recovering crack addict, says about her: "She feels anyone can just stop but it just doesn't work that way." In one of the most surprising sequences in the documentary, she kicks out Mel, one of the longest residents of the community, because of his refusal to take baths.

"I have spoken to people involved in twelve-step programs and they have told me of the terrifying feeling of not being able to stop themselves from doing something that they know is wrong and will turn their life into chaos," writes Rabbi Harold Kushner about the plight of addicts and alcoholics. "It is like being in the path of a flood and being swept away by raging waters." Sister Helen knows the terrible emptiness that the men in the house feel, and she tries to give them new rituals and routines to replace the ones that have destroyed their lives. She is a tough character who clings tenaciously to her mission even in the face of an invasion of rats, bureaucratic muck-ups, and the disappointments of seeing men fall back into their addictions after long periods of being clean and sober. This documentary reveals that Sister Helen allowed the suffering of others to touch her heart and transform her life into one of compassionate service of others. 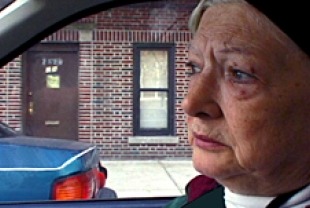