Directed by Aaron Blaise, Bob Walker
Eschews the competitive and self-centered values of popular culture and proclaims the grooming of one's spirit with love and caretaking.

The dominant values of American culture are success, winning at all costs, power, and wealth. These are conveyed to children with such intensity and repetition that it is a wonder stories with different values or from any other culture are ever seen at all. This counter-cultural animated film is set in the Pacific Northwest 10,000 years ago. Here the word of the spirits intermingles with the everyday lives of a Native American tribe in a tale about totems, bears, and brotherhood. It is directed by Aaron Blaise and Robert Walker and has six songs by Phil Collins. The major number is "Great Spirits" sung by Tina Turner where the lyrics proclaim: "Show us that in your eyes, we are all the same / Brothers to all creatures / In this world, we remain truly brothers all the same." This message of the connections that link us to others, even across species lines, is not new to Native Americans. They have been trying to get it across to other cultures for centuries. Here is a family film that delivers the message in a winning way that is accessible to young children.

"The world is filled with magic," says an elder to a circle of listeners as he begins a story about himself and his two brothers. He is Denahi (voiced by Jason Raize), and his younger brother Kenai (Joaquin Phoenix) is about to be initiated as a man and given a totem animal to guide him through his life. An adventuresome youth, he hopes that it will be a fierce animal like the eagle that was given to his oldest brother Sitka (D. B. Sweeney). So when Tanana (Joan Copeland) hands him his totem and he sees that it is a bear — the symbol of love — he wants to trade it in for another one. The shaman tells him that the bear connects and unites all things and reveals itself in unexpected ways. Of course, Kenai doesn't hear a word she says.

The Great Spirits decide that this impulsive youth has a lot to learn. After a tragedy in the wilderness, Kenai tracks down the grizzly responsible and kills it. He is then transformed into the animal by the Great Spirits who want to teach him about empathy. The shaman appears to him and tells him that everything will become clear when he reaches "the mountain where the light touches the earth." When Kenai gets his foot caught in a hunter's trap, he is rescued by an orphan bear cub named Koda (Jeremy Suarez). This talkative little one has always wanted a brother and immediately tells Kenai that he can lead him to the mountain.

The two bears set off on their pilgrimage and are joined by two wayward and slow-witted moose (Rick Moranis and Dave Thomas). Traveling across a dangerous volcanic field, they are further endangered by Denahi who is seeking revenge for the death of his little brother, not realizing that Kenai and the grizzly are the same being. The last stop before the mountain is a visit with some partying bears who meet at an annual salmon run. They share stories and Kenai learns more about the true identity of Koda's mother.

Brother Bear eschews all the competitive and self-centered values of popular culture and proclaims instead the ancient virtues that are conveyed by the Native American expression "all my relations." It proclaims that true grooming of one's character comes through love and caretaking. This is a fine family film with a melodic soundtrack and a heart-affecting finale.

Among the fun DVD extras is an amusing full-length audio commentary by Rutt and Tuke, the moose in the story; some deleted scenes; and some fully animated outtakes. Phil Collins provides a new song, "Fishing Song," in addition to the music video of "Look Through My Eyes." A 45-minute documentary, "Paths of Discovery: The Making of Brother Bear," takes us behind-the-scenes. 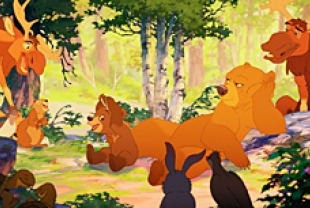 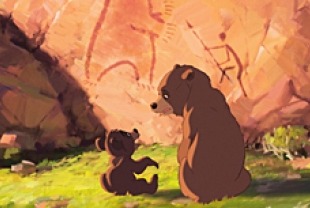 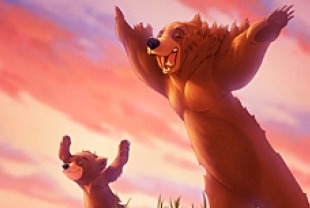