Directed by Norman Jewison
A serious drama based on a novel by Brian Moore that explores crimes against humanity, the activities of a right-wing organization in the Catholic Church, and forgiveness.

In June, 1944, seven Jews are taken from their homes in the French town of Dombey and ordered to stand against a wall by members of the Milice, the military police created by the Vichy government to carry out the policies of the Nazi occupiers. The Frenchman who gives the orders to execute these Jews is Pierre Brossard.

In 1992, Pierre Brossard (Michael Caine) is living from month to month in a series of abbeys, where he is given refuge by right-wing members of the Catholic Church who believe that he was just "following orders." He is also sent money and given counsel by a group of former Vichy colleagues, including Commissaire Vionnel (Frank Finlay). On the road to one abbey, David Manenbaum (Matt Craven) attempts to assassinate Brossard but he is killed by the seasoned escape artist. In his car is a statement, intended to be placed on Brossard's dead body, explaining that this act of justice was done in the name of the Jews who died at Dombey. Pierre realizes that his situation is getting desperate.

In Paris, Judge Annemarie Livi (Tilda Swinton) is also trying to locate Brossard. Although he was arrested after the war for his crimes, the President of France gave him a full pardon. Now he has been charged again with crimes against humanity. The judge, unwilling to trust the police, calls upon Colonel Roux (Jeremy Northam) to help her find the fugitive. She is the daughter of a Catholic mother and a Jewish father but calls herself an agnostic. She has nothing but scorn for the Catholic clergy who have been sheltering Brossard.

As their investigation goes deeper into Brossard's whereabouts, they learn about a secret group called the Chevaliers, right-wing extremists who supported the Nazis as opponents of the Communists. The judge realizes that she is on the right track when she is called for a meeting with Minister Bertier (Alan Bates), an old family friend, who asks her not to continue the Brossard case, warning that she is out of her league and risks great danger. Of course, this threat only emboldens her in her resolve to capture the war criminal and, even more important, to expose those French persons in high places who have been supporting him for decades.

The Statement is directed by Norman Jewison from a screenplay by Ronald Harwood based on a 1997 novel by Brian Moore. The film is dedicated to the seven men who were executed in Dombey and the 77,000 other French Jews who perished under German occupation and the Vichy Regime. Moore's novel was inspired by the case of Paul Touvier, a Vichy functionary who was sentenced to death in absentia after the war but eluded capture until 1989, thanks to the support of sympathizers in the church and high-place government officials.

Jewison has made this story into a thriller in which Brossard escapes again and again from the clutches of the judge, the colonel, and another assassin sent to kill him. But the most interesting dimension of the drama is the question of whether or not this war criminal's search for forgiveness from God is genuine. Perhaps the best clues to the real character of Brossard come when he seeks sanctuary in the small apartment of his estranged wife, Nicole (Charlotte Rampling). She scorns him for betraying everything dear to him and to his religious hypocrisy exposed by the fact that he won't worship with blacks. Yet when he has a nightmare of seeing the Jews fall to the ground in death, she cradles him in her arms to help him ward off those terrible memories. In the end, we are led to believe that the forgiveness and grace that Brossard seeks from God is more sure than anything he will ever receive from human hearts.

The DVD has an audio commentary by director Norman Jewison, a "making of" featurette, and interviews with Jewison and star Michael Caine. 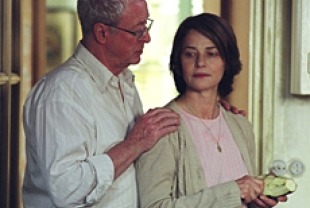