House of Sand and Fog

Massoud Amir Behrani (Ben Kingsley), a former colonel in the Iranian military under the Shah, is the host at the sumptuous wedding of his daughter in America. A friend of the family comments on how prosperous he looks. However, his suntan does not come from leisurely hours spent sitting beside the swimming pool. It comes from working with a highway crew in order to keep up the payments on the expensive San Francisco apartment where he lives with his wife Nadi (Shohreh Aghdashloo) and his teenage son Esmail (Jonathan Ahdout). Exhausted and humiliated from also working a night job as a clerk in a convenience store, Behrani decides to buy a property at an auction. His idea is to make a few changes and immediately sell it for a substantial profit. He needs the money to continue his lifestyle and to send his son to college.

The bungalow has been seized by the county for back taxes. Kathy (Jennifer Connelly), who inherited it from her father, is in a state of shock and disbelief when she is told to immediately leave the premises. This recovering alcoholic, who cleans houses for a living, is still reeling from being left by her husband. Deputy Sheriff Lester Burdon (Ron Eldard) volunteers to help her move her meager possessions into storage while she figures out what to do next.

Connie Walsh (Frances Fisher), a legal aid attorney, tells her that she has been evicted for nonpayment of business taxes and that many letters were sent by the county to obtain payment. But Kathy hadn't opened her mail. She maintains that an error was made by the country since a business was never operated on the premises. When the lawyer tells her that Behrani has already purchased the property and will only sell it back at a high price, Kathy realizes to her dismay that she has lost in a few months what her father took 30 years to pay off.

In his debut as a director, Russian-born Vadim Perlman has adapted Andre Dubus III's bestselling novel for the screen along with Shawn Otto. The drama offers many themes to consider including the American Dream, the meaning of home, the downward mobility of a woman besieged by bad luck, and the yearning for upward mobility of an immigrant who wants to escape the menial jobs he has had to take to survive in his new country of choice. Ben Kingsley is perfect as the proud and hot-tempered Behrani who keeps secrets from his wife, has high hopes for his son, and turns out to be a vigorous defender of his new home. In the scene when he pauses to look at a photograph of himself with the Shah, we realize all that he lost when the allatollahs took over and he had to go into exile. But he is determined to rebound. To make his new property more attractive, he has builders put a terrace on the roof so they can see the ocean. He fondly recalls the view of the Caspian Sea the family had back in Iran.

Jennifer Connolly captures all of Kathy's depression and self-destructiveness. Estranged from her mother and brother, both in the East, she is adrift on a sea of changes that seem beyond her capacity to handle responsibly. Before long she has returned to both cigarettes and alcohol. With no one else to turn to, she accepts the kindness of Lester, and then responds to his romantic overtures after learning that there is no passion in his marriage. Essentially homeless, Kathy goes back to her former house and is received by Nadi. This gracious woman has no idea who Kathy is nor why she is so upset.

Kathy and Lester move into a cottage together, but when he goes back to his family to explain his move, she feels abandoned again and turns suicidal. In the film's most dramatic moments, her arch enemy Behrani becomes her surrogate father and rescues her. This surprising moral turn is totally understandable given his cultural background and the compassion required by his Muslim faith.

The fog shrouding the California coast near the bungalow almost seems like another character in the film. It becomes a metaphor for the mysteriousness of human nature; we can never really know people or what they are capable of. Hence, we should never be quick to judge them or write them off. Each of the characters in the drama is flawed but capable of kindness, love, and self-sacrifice. Viewers will find themselves shifting allegiances between Behrani, Kathy, and Burdon as they try to cope with the conflict that draws them together in a circle of anger, recrimination, love, and loss. On an even deeper level, we can see aspects of our own shadow sides in the volatile emotions of these adversaries as they struggle to assert their wills in defense of their highest desires.

The DVD has commentary by director Vadim Perelman, star Ben Kingsley, and author of the novel Andre Dubus III. There is a behind-the-scenes featurette, with more discussion of the transfer of a book to film. An unusual extra is the audition tape of Shohreh Aghdashloo, who was nominated for an Academy Award for her performance as Naderah Behrani. 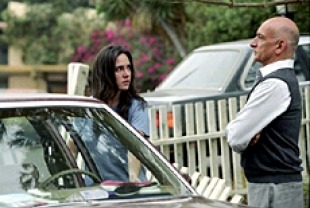 R - some violence/disturbing images, language, a scene of sexuality