Directed by Mike Newell
Pays tribute to a bohemian teacher who tests her idealism in the conservative milieu of Wellesley College.

In 1953, Katherine Watson (Julia Roberts) travels from California to the New England campus of Wellesley College to teach art history. She anticipates working with the smartest young women in the country and being able to open their eyes to the glories and nuances of the masters, both ancient and modern. She wants to make a difference in her students' lives. But Watson's bohemian ways are the immediate subject of conversation and gossip on the campus. In her first class, this nervous teacher is completely astonished at the knowledge the girls have about art — especially traditional art. They make her feel like she has nothing new to give them. Amanda Armstrong (Juliet Stevenson), who has been a nurse at Wellesley for 21 years, says of the students: "They have claws underneath their white gloves." Watson soon realizes that she will have to take another approach in the curriculum. She decides to center the course around questions: What is art? Is it good or bad? What criteria can be used to decide these questions?

Among the very formidable young women in her class are Betty (Kirsten Dunst), a wealthy young woman who apes the conservative values of her mother, a Wellesley board member; Joan (Julia Stiles), a straight A student with many extra-curricular activities; Giselle (Maggie Gyllenhaal), a sexually liberated young woman who likes having affairs with older men; and Connie (Ginnifer Goodwin), a gifted cello player who yearns to win the attention and affection of a young man. The school prides itself on its high standards of academic excellence while making it clear that the only grade that really counts is what a husband gives his wife for her performance as a wife and mother. No wonder the Wellesley girls not only study foreign languages but also must know how to be the perfect hostess at a dinner party for their beau's boss. Their poise and elocution teacher is Nancy Abbey (Marcia Gay Harden), an insecure and lonely woman whose still looks forward to regular visits by her parents and spends most of her spare time watching I Love Lucy and Strike It Rich on television. She is very upset when she discovers that her housemate, Katherine, is dating Bill Dunbar (Dominic West), a cynical Italian professor at Wellesley who has just ended an affair with Giselle.

Mona Lisa Smile is directed by Mike Newell (Enchanted April, Donnie Brasco, Pushing Tin) based on a screenplay by Lawrence Konner and Mark Rosenthal. Newell has a knack for making character-driven dramas with quirky characters who must sort out their priorities. It is fascinating to watch Katherine Watson test her idealism in this conservative milieu where appearances and tradition are more important than anything else. Katherine is told repeatedly that change comes slowly but she will have none of it. When she learns that Joan has an interest in becoming a lawyer, she bulldozes her into applying to Yale, then goes into a funk when she learns her pet project has secretly gotten married and will live in Philadelphia while her husband is going to graduate school. Her boyfriend is right on the money when he says of her: "You think you came to Wellesley to help the girls find their way. I think you came to help the girls find your way."

In the end, even Katherine is surprised by her impact on the women in her classes, especially one who does a complete turn-around when she sees the light. Mona Lisa Smile joins a handful of other fine films about teachers who have made a real difference in the lives of their students.

The DVD presents an "Art Forum" in which the cast members answer Katherine's question "What is art?" Another feature comparing college life for women in 1953 and now with comments by the cast, director, and producers; and a second one looks at the cultural expectations for women in the 50's. Elton John's music video "The Heart of Every Girl" rounds out the extras. 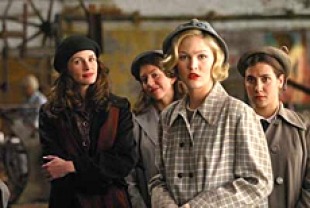